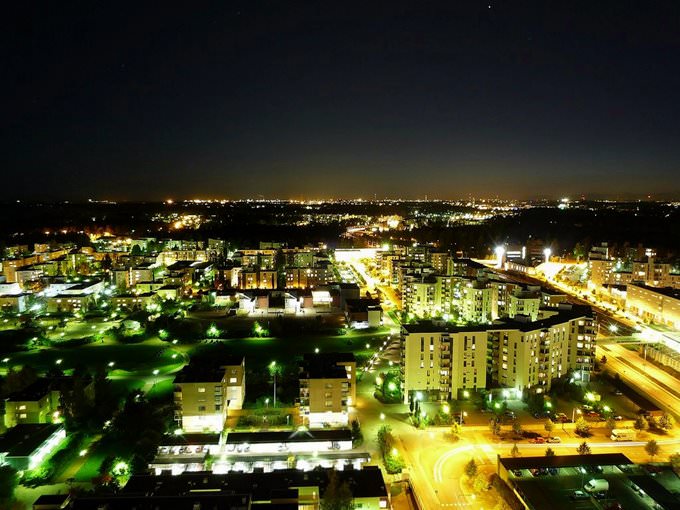 You will find the widest number of entertainment venues in Helsinki. Park Linnanmaki is the best place for family rest. In this park you will find more than three dozens of thrilling rides. In addition to this, the park is simply full of cozy restaurants and cafes, various stores and souvenir shops, as well as a large house-aquarium. The aquarium is home to numerous Baltic Sea inhabitants, as well as rare species of fish and shellfish imported from all over the world.
Unusual weekend in Helsinki: accommodation in extraordinary hotels
Without a doubt, Best Western Premier Hotel Katajanokka remains the most creative and easily recognized hotel in Helsinki. It is located on Katajanokka Island, where the hotel occupies a …

Open
A visit to Heureka entertainment complex will be no less interesting. All of its expositions and rides are very curious and will be definitely loved by young travelers. During the tour you can learn a lot about the features of the human body, amazing natural phenomena and examples that show natural laws of physics. On the territory of the entertainment complex you will also find a park, where you will find rich exhibition of minerals. Tourists, who enjoy walking in beautiful places, are recommended to visit Esplanade Park, the main decorations of which are beautiful fountains and statues. Here are located several interesting restaurants. In the warm time of the year the park often becomes the venue for numerous music concerts and performances.
There are many nightclubs and discos in the city. Here absolutely every traveller will find a place to rest that will fit his/her taste perfectly. Kaarle XII is the oldest nightclub of the city. It was opened in 1976. The club will attract fans of various musical styles. Gourmet visitors will also like it, because next to the club is opened a great restaurant with the same title. Club Helsinki is located in the shopping district of the city. Technical equipment of the club deserves the highest praise. In addition to enchanting music performances, here are often held fashion shows, presentations, and other interesting activities that will make the holiday even more diverse. Fans of "metal" music will be surely delighted by visiting the club named Hevimesta. Several times a week here are organized theme parties, and the club becomes the venue for concerts of well-known musical groups. Copyright www.orangesmile.com
Helsinki design-hotels for stylish travellers
It is safe to say that Hotel Klaus K is one of the most famous designer hotels in Helsinki. The hotel’s concept and its inimitable décor are inspired by the Kalevala epic poetry. The …

Open
The best and most easy way to get acquainted with the capital of Finland and enjoy its attractions, as well as spring and summer atmosphere is by bike. We all know how European people are eco-friendly, and Helsinki is not an exception. In Helsinki, there is about 750 km of excellent bike trails, which can be reached almost anywhere. Worthy of attention is the bicycle route, for example, opened in 2012 Baana track length 1.3 km, which is laid on a former railway tunnel and extends from the Kiasma Museum seaside district Ruoholahti. On the road, there are separate lanes for cyclists and pedestrians. Nearly 180 trees, 4000 shrubs, and perennial plants are planted here. The route is framed by massive rocks and stone walls built 100 years ago. On the road, there are places for recreation and works of natural art. Near the hospital Maria, there are playgrounds for basketball, table tennis, and petanque. Under suitable weather conditions, Helsinki offers around 180 kilometers of trails. The best skiers cross the Central Park; they are supported, depending on the situation with snow, until late spring. At the hostel Paloheinä, located in the center of Helsinki, you can rent ski equipment and snowshoes. Near Helsinki, there are good slopes for lovers of alpine skiing and snowboarding. In all the centers, if necessary, you can rent equipment, as well as receive training at a ski school. 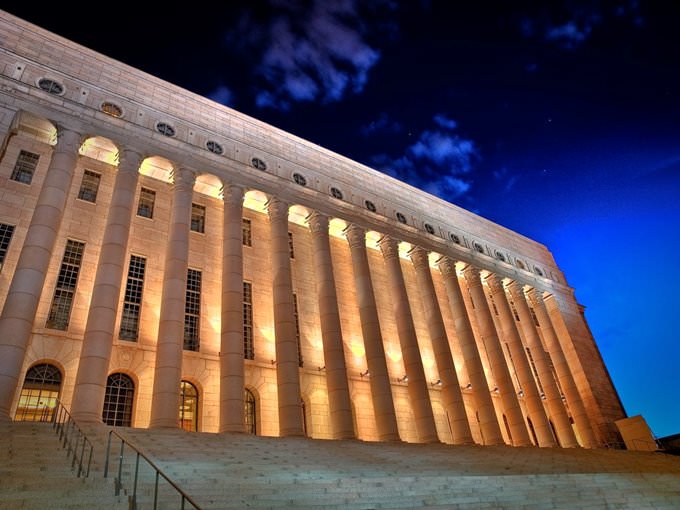 Rowing in Helsinki - is cool! To stay in the city, which is almost surrounded by the sea, without trying to swim on the canoe, or on a kayak - savagery! Here you will find many companies, which will gladly help you to get acquainted with the sea circle of Helsinki. Tourists and fans of fishing can also purchase a license for tourist fishing. The license includes fishing on tackle and spinning. There is the special territory equipped for fishing - Vanhankaupunki area, which is surrounded by water rapids. Licenses can be purchased at the Meri-Info booth, located behind the building of the Museum of Technology. Visitors aged 18 to 64 must also pay a state fee for fishing. If you are in Finland - you have no right not to try truly Finnish sauna. There are about 3 million saunas here. And all of them periodically melted regardless of the time of year. Finns soar at 100 ° C, which means that from time to time it's worth taking breaks to cool down. The easiest way is to dive into the lake or the sea, and in the winter - to plunge into the hole. As an option, puff up in the snow. If you intend to visit a real Finnish sauna, then leave a towel and clothes in the locker room and go to the steam room naked. In public saunas, as a rule, there are separate hours of work or own sections for men and women.

This guide on active recreation and leisure in Helsinki is protected by the copyright law. You can re-publish this content with mandatory attribution: direct and active hyperlink to www.orangesmile.com.
Helsinki - guide chapters 1 2 3 4 5 6 7 8 9 10 11 12 13 14 15 16 17

Recommended places for active recreation and leisure in Helsinki

National and city parks around Helsinki
♥   National Park 'Sipoonkorven kansallispuisto' , 19.5 km from the center. On the map

♥   National Park 'Nuuksion kansallispuisto' , 29.3 km from the center. On the map

♥   National Park 'Liesjärven kansallispuisto' , 82.2 km from the center. On the map

♥   National Park 'Päijänteen kansallispuisto' , 137.8 km from the center. On the map

♥   Amusement park 'Puuhamaa' Tervakoski, 72.4 km from the center. On the map

Water attractions around Helsinki
♥   Water park 'Flamingo Spa' Helsinki, 12.9 km from the center. On the map

♥   Restaurant 'Bronda' Helsinki. Type - Modern cuisine. 1.1 km from the center. On the map

Sites around Helsinki from our surveys on extreme Earth places Distance from Helsinki center - 0.5 km.
Besides the sauna itself, there is a rest area with sleeping places on the bus, as well as a small kitchen. In a matter of months, the sauna bus has gained incredible popularity. Nowadys, travellers have an opportunity to book it to any country in Europe. The sauna is open all year round and is great for long trips. Its carefully planned environment allows you to get acquainted with beautiful national traditions of Finland. … Read further Distance from Helsinki center - 0.5 km.
The large-scale celebration was preceded by the annual fair which took place in Helsinki from the middle of the 18th century and traditionally coincided with the completion of fishing. At modern fairs you can buy a lot of other interesting products such as knitted clothes made of natural wool, original artisan crafts and beautiful crockery. Traditionally, the Herring Festival is accompanied by interesting culinary competitions, master classes and presentations. It is a very heart-warming and sincere holiday full of national hospitality. … Read further Search for active leisure and attraction spots on Helsinki map

Tallinn
Rides on boats and yachts along the coast remain one of the favorite pastimes of tourists. During such ride you will not only enjoy sightseeing, but also will be offered to taste national cuisine. Fans of bowling will surely enjoy Al Mare Bowling club, which is perfect for the rest of a large company. Fans of tennis will also find great entertainment in Tallinn as there are ... Open »
Lahti
In summer, Laune Park is very popular among holidaymakers with kids. Its territory is equipped with a children's velodrome, interesting playgrounds for children of different ages, as well as free spaces for active games. Along with that, recreation areas with gazebos and benches are prepared for adults. This city park is always distinguished by very beautiful landscape ... Open »
Tampere
A favorite holiday destination among visitors of the city is a picturesque Pyynikki Park. It is perfect for a relaxing stroll, picnic and sports activities. There is a beautiful old tower in the park; its top is equipped with a beautiful viewing platform. Park is located along the coast, so in warmer months many tourists prefer to sunbathe on the beach right there. A visit ... Open »
Parnu
The Ranna center being known for healing mud baths serves customers all the year round. It is located in a beautiful historical building. Its visitors may choose from a variety of treatments and healing procedures enjoying luxurious atmosphere of the center meeting fancies of even the most sophisticated customers. The city center locates one of the most popular spa centers ... Open »
Narva
Narva boasts of many modern entertainment centers to suit every possible taste. Bowling enthusiasts will love Bowling Number 1 where they can enjoy their favorite game having a great time in a big group. In addition to bowling alleys, the center houses a great bar where you can hold a family party. Narva has several modern casinos, which would be of interest even to those ... Open »

Guide to your best city break in Helsinki - popular places for recreation and leisure. Things to do during the day in Helsinki - attractions, parks, beaches, aquaparks, racing tracks, biking trails or waterski. Recommendations (with addresses, phone numbers and links) where to spend your time in the evening (bars, discos, clubs, etc.). We share some good ideas and the question 'What to do in Helsinki?' disappears immediately.