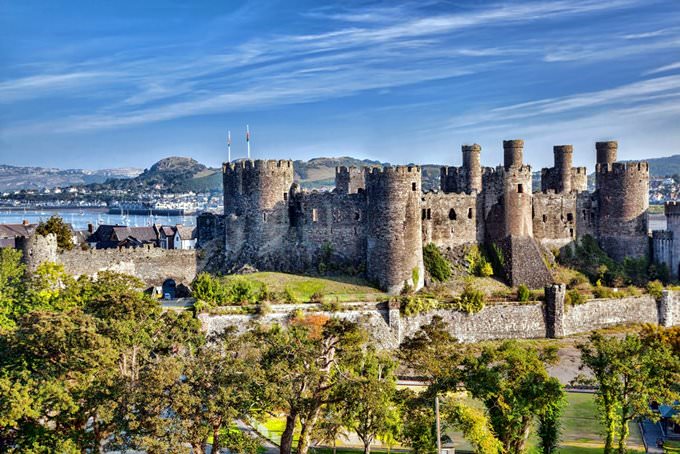 The climate in the UK is influenced by the warm Gulf Stream, so the average temperature in the country is higher than in other countries of this latitude. Due to the peculiarities of the location, there are lots of cloudy days. They make up to 50% a year. The least precipitation and most sunny days are observed in the county of Essex. In the UK, a large system of national parks is established. It allows preserving forests and the unique ecosystem. Most of these parks are on the territory of England. Several reserves are also located in the territory of Wales and Scotland. One of the largest national parks is Lake District in the county of Cumbria. It is very popular among tourists and local residents.
Top architectural sights of Great Britain
Monuments and architectural objects, notable for the history and culture of the country. …
Read further
The landscape of the park was formed 15 thousand years ago when the ice age has ended. Its modern relief is a wide valley, which is stretched at the foothills. There, you can find corrie basins, which are originally melted glaciers. The centuries-old oak forests grow below. The lowlands are occupied by swamps and moors lying among the picturesque mountain ranges. There is a large wasteland in the park. In the southern part of Wales, there is the Brecon Beacons National Park, the town of Brecon, as well as a large number of small towns, ancient villages, Welsh castles, and relics from the Celtic times. This national park can boast with the most famous cave complex in Western Europe, Dan yr Ogof. There are several hiking trails in the park. The most famous is the Bwrch To Tor y Foel, from which scenic views open.
Yorkshire Dales National Park is 80 kilometers north of Manchester in Yorkshire. It is very popular among tourists. Annually, it is visited by more than 8 million people. The park has hiking trails. There are several small villages and charming towns on its territory. Tourists will be interested in strolling or cycling along one of the special trails. The longest one stretches for 429 kilometers. You can also enjoy horseback riding in the neighborhoods or visiting the cave system. Most of the area of ​​the park is covered by plains, where you can see herds of goats and sheep grazing. The park also hosts several major historical attractions. One of them is Bolton Castle, which is famous and popular among tourists. In addition to it, you can visit the waterfalls of Aysgarth, Kotli Spout, and the railway viaduct. There are only 2 national parks on the territory of Scotland - Loch Lomond and Trossachs National Park and Cairngorms. Loch Lomond features a huge number of mountain peaks. The highest of them is Ben Moore with a height of 1174 meters above sea level. The park has the longest walking trail in Scotland, the Great Path. There are many historical sights and ruins of castles along this trail. During the walk, it is worth to visit the castles of Bulloch and Carrick, built in the 15th century. Those who want to stay for the night will be able to spend time in a hostel set in a very impressive old building. Another attraction of Scotland is Loch Ness. It became known due to the legend of the Loch Ness Monster, which was seen repeatedly by local residents. On the shore of the lake, there is a museum dedicated to this legend. Copyright www.orangesmile.com
Great Britain sightseeing - top places to visit
First settlers appeared on the territory of the modern Great Britain yet during prehistoric times, so there are more than many old buildings, …
Read further
Devon county has another national park with traces of people of prehistoric times. The Dartmoor Park is predominantly a marshy area among small hills. Once these wastelands were official royal hunting grounds. Today, you can meet the half-wild Dartmoor pony there. Finds of the Bronze Age were discovered in caves. There was a town of Exeter founded by the Romans. The New Forest National Park was a favorite place of William the Conqueror for hunting the deer. Today, deer, doe, Chinese muntjak, as well as unique New Forest ponies live on its grounds.

National and city parks of Great Britain
♥   Park 'Botanic Gardens' . On the map Balmoral Castle is situated on the shore of River Dee in Aberdeenshire area. Since the building, it was a private residence of English kings. This palace was a favourite place of Queen Victoria. She used to come here in August. The castle was built in a Gothic style that looks outstanding. The main building material was granite. In 1856 the building works were finished. The castle that we see today is the original one, particularly nothing has changed.

The castle façade is decorated with a number of delicate sculptures of Saints and heraldic symbols. The inner decoration deserves highest complements. There were saved a lot of pieces of art and precious elements of decoration. The main gilded staircase resembles a real masterpiece of art, its carver parapets have quite unique wavy form. ... Read all Dunnotar Castle is a ruined medieval fortress located on the north-east coast of Scotland. At first, it was mentioned in the 7th century. The main aim was to build a defensive construction that will be much better than other Scottish fortresses. This fortress is located upon a rocky headland. There was the time when it was possible to get to the castle only by a narrow and steep track that went through a complex of caves. Also, the castle had a secret passage that was hidden in a chimney of the rock.

For a long time, the fortress was inaccessible. In the beginning of the 12th century on orders of King William I the fortress was adopted in an administrative centre of Scotland. After these renovations, the castle was the main kings’ safe tower. Today a great number of legends are ... Read all
All unique sightseeing Great Britain London
Outdoor enthusiasts should definitely not forget to visit Regent's Park. In the beginning of the 19th century many beautiful villas were built on its territory. Here was also created an artificial lake and were planted thousands of trees. Nowadays locals and travellers come to the park to admire a beautiful garden of … Read more

Edinburgh
Princes Street is an excellent place for long unhurried walks. It was built in the 19th century and was named in honor of the sons of the royal family. During a walk through the picturesque street you will see a beautiful garden named Princes Street Gardens. The street is also the location of numerous interesting … Read more

Blackpool
The Promenade is also the location of a large part of Blackpool’s cultural institutions. Louis Tussaud's Museum is one of them. The museum exhibits a large collection of wax figures, which are devoted to well-known political figures, athletes and artists. It should be noted that Wax Museum is a fairly "democratic" … Read more

Manchester
The collection of the museum features inestimable archeological discoveries, significant historical artifacts as well as art objects. The museum is one of the most visited cultural destinations of the city. City visitors have a chance to explore unique architectural landmarks. The most remarkable and significant spot … Read more

York
Jorvik Viking Centre is one more interesting cultural institution. This is a huge museum dedicated to legendary Vikings. It features a huge collection of exhibits that are very diverse. Here you will find models of old ships, maps, and antique weapons, as well as many other historical artifacts related to the … Read more

Glasgow
Glasgow Royal Concert Hall is a no less popular cultural institution, which often becomes the venue for numerous musical events. Here visitors can get to a performance of a popular rock or jazz band, or attend a classical music concert. Speaking of attractive museums, we simply cannot fail to mention St Mungo Museum … Read more