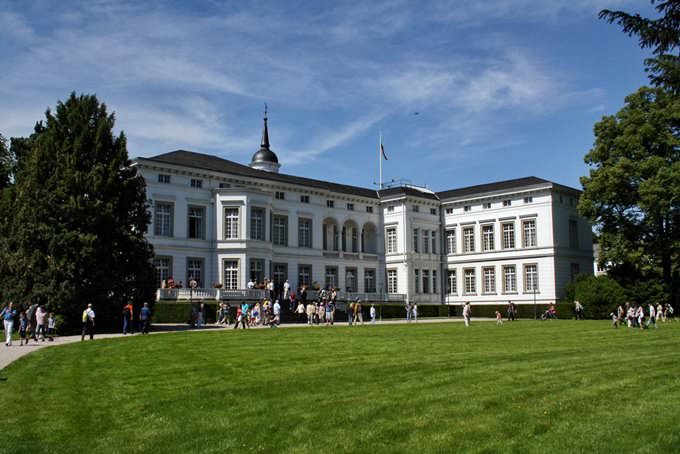 The University of Bonn is a well-known object of excursions, which is popular far beyond the borders of the country. Among the students of this university were such famous people as Karl Marx, August Wilhelm von Schlegel, Heinrich Hertz, and several Nobel Prize laureates, who have spread the fame of the ancient university around the world. The opening of the educational establishment was held in 1818. Currently approximately 30,000 students from different parts of the world study there. Tourists will be interested in making a walk through the picturesque courtyard of the University, visiting the old library, and enjoying the grandeur and beauty of this magnificent historic building.
Bonn design-hotels for stylish travellers
Near the main railway station of Bonn is prestigious InterCityHotel Bonn, which can be safely called one of the most elegant and refined in the city. The hotel offers its clients spacious …

Open
Several noble family mansions have preserved in Bonn till our days. Tourists should definitely visit Beethoven House Museum. The great composer was born in this house and spent most of his life there. The basis of the museum’s collection is made up by research papers and personal belongings of the composer. You will also find works of contemporaries dedicated to Beethoven works. Hammerschmidt Villa is an interesting architectural object. This is a beautiful building in the neoclassical style, which was built in the 19th century. The house was built for one of large traders of the city, but soon it was bought by Rudolf Hammerschmidt, whose name was used in the name of the mansion. After the end of the Second World War the building became the main residence of the President of Germany. The villa reserves this honorable status till these days.
Schaumburg Palace, the building of which was completed in 1859, is a no less famous landmark of Bonn. Right after the building of the palace a beautiful large garden was laid next to it. Even nowadays the garden remains a favorite place of rest among both residents and travelers. Among the religious attractions of the city we simply cannot fail to mention Church of Jesus Christ, which is located near the university. The cathedral is notable not only because of its unique architecture, but also because of a notable historic fact – in this church often played the organ young Beethoven. The church is open to the public every day and everyone can enter its beautiful and spacious halls. Copyright www.orangesmile.com
Top places to stay in Bonn - most luxurious hotels
The most luxurious and famous hotel in Bonn is Kameha Grand Bonn. This five-star hotel with a developed infrastructure and original interior offers customers a choice of more than 250 rooms. …

Open
Travelers will certainly be interested in attending the building of the Order of Archangel Michael (Michaelstor), which is located not far away from the center of the city. The mansion was built relatively not long ago, in the middle of the 18th century, but it is no less popular than other older architectural monuments of the city. The building was severely damaged during the Second World War, so nowadays a part of the sculptures that adorn its facade are copies of the works of masters of the 18th century. Thus, you can see the statues of the four virtues at the top of the main building. Many years ago they were the object of worshipping among the members of the order. Despite the fact that these statues are made by modern sculptors, they are in a perfect harmony with other buildings. 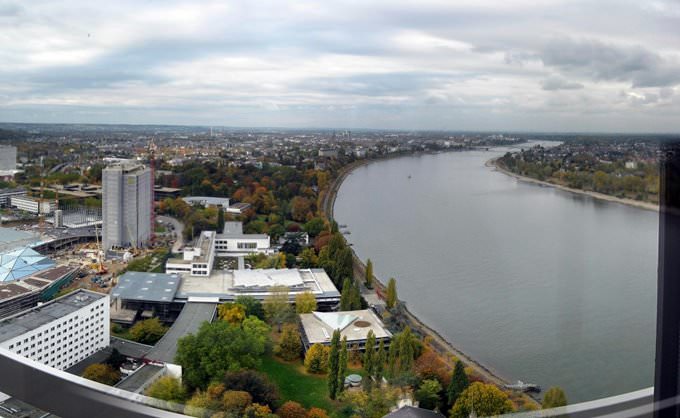 In the hometown of Ludwig van Beethoven, there have been preserved many interesting architectural attractions, among which the Sterntor gate is worth mentioning. The building was put up in the year 1244 and renovated in 1898. The most significant antiquities you will come across here are the bas-reliefs “Crucifixion” and “Seven Sorrows”. You can see here the remains of the fortress wall, and at some point, the street was also adorned with a fortress. In addition, there is a beautiful fountain as well as many fascinating cafes and restaurants nearby. It is likewise important to discover the landmark erected to the most celebrated local of the city (we are obviously talking about the monument mentioned on numerous account, Beethoven), which is situated on Münsterplatz.
OrangeSmile.com recommends best hotels in Bonn Sternhotel Bonn , Rating 8,3
Old hotels keeping the history of Bonn
Ringhotel Rheinhotel Dreesen can safely claim the title of the real historical sight of Bonn. Standing on the bank of the Rhine, it occupies a chic Art Nouveau building. For more than 120 …

Open
Godesburg has great historical value. The building was constructed at the beginning of the 13th century and was totally destroyed during the siege of 1583. As a result, it was only in 1891 that the castle was slightly restored. Later in 1959, the castle was completely restored. To get to the castle, you need to climb, but it is definitely worth it. Furthermore, beautiful views of the city and surroundings open up from here. You can find an eatery serving mouthwatering food nearby. In any case, those who wish to visit the modern building in Bonn will definitely like the World Conference Center. It was built in 1999, and since that time, important gatherings of the most astounding state officials have been held here.

Doppelkirche stands out among religious sites. The church is extraordinary in that it is a combination of two structures in one – one dedicated to the Virgin Mary, and the second to Pope Clement I. Furthermore, this is one of the buildings that have been perfectly preserved after the events of World War II. The church is also interesting for its frescoes and columns. Heilige Stiege is famous for its magnificent interior decoration, as well as for being an exact replica of the palace of Pontius Plata in Jerusalem, in which the Roman Governor pronounced a verdict on the crucifixion of Christ. The main church in the city is Bonner Münster. The church was built in the 13th century in the Romanesque style. The building is magnificent and definitely worth a visit.
Best hotel choice for romantic escape, wedding or honeymoon in Bonn
When choosing a hotel for the next romantic holiday or a wedding ceremony, be sure to pay attention to Günnewig Hotel Residence. The refined interior of its rooms is just one of the many …

Open
There are also several interesting museums in the city. For example, there is the Kunstmuseum, which will appeal to all admirers of modern art. Temporary exhibitions are often held here. Frauenmuseum is another unique place whose exhibits include collected works of art created by women. Akademische Museum will be found attractive by those who prefer sculptures, and Ägyptisches Museum attracts all lovers of Egyptian culture – here you will be told the story about mummification, you get to look at interesting figurines, household items, and decorations of that era. Let us not forget the Rheinisches Landesmuseum, definitely one of the best museums in Bonn, where you can get acquainted with the life of the ancient ancestors of the Germans at one time or another.

In the section below, you can get one of our excursion, activities or city discovery tours over Bonn and surroundings. Our website offers 10-30% lower ticket prices, when compared to the offline purchase on the spot.

City tours, excursions and tickets in Bonn and surroundings

This guide to cultural sights Bonn is protected by the copyright law. You can re-publish this content with mandatory attribution: direct and active hyperlink to www.orangesmile.com.
Bonn - guide chapters 1 2 3 4 5 6 7 8 9 10 11 12 13

What to visit during two-day excursion in Bonn

Public palaces near Bonn
♥   Palace 'Electoral Palace' Bonn, 0.2 km from the center. On the map

Art galleries in Bonn and around
♥   Art museum 'Rheinisches Landesmuseum Bonn' Bonn, 0.5 km from the center. On the map

♥   Art museum 'Wallraf-Richartz Museum' Cologne, 24.8 km from the center. On the map

♥   Art museum 'Käthe Kollwitz Museum' Cologne, 25 km from the center. On the map

Cathedrals and basilicas near Bonn
♥   Basilika St. Severin, Köln, 23.3 km from the center. On the map Photogallery of cultural heritage of Bonn

Excursions over cultural sights of neighbours of Bonn

Cologne
The first building on the site of the modern Town Hall was built in the early 15th century. The Town Hall was not restored seriously until the middle of the 20th century. The building stood in its original form for more than four hundred years. During the Second World War the building was completely destroyed. Only in 1972 architects managed to complete restoration and return ... Open »
Leverkusen
Not far from the railway station, you will find the original church Herz-Jesu-Kirche, which was completed in 1930. It is built in an industrial style, which makes it strikingly different from most churches dated by the first half of the 20th century. The building is adorned with a tall bell tower of a regular rectangular shape. Beautiful arched windows are executed at the top ... Open »
Langenfeld
In the immediate vicinity of the city, in Dormagen, there is an interesting historical museum called KreisMuseum Zons. It occupies another remarkable historic building with a century of history. Today, the two-story building houses a rich collection of historical exhibits including valuable documents and unique works of art. In the museum, you can see old handmade furniture ... Open »
Gummersbach
Another great viewing platform is Aussichtsturm Knollen offering views of the Rhine Valley in the west, mountain landscapes in the northeast, and Westerwald in the south. The 446-meter-high observation platform was built in 1975. You can have a great time walking through the Westfriedhof. Despite the fact that it is a cemetery, it's very peaceful here, so walking can be an ... Open »
Koblenz
There are also world-class attractions in Koblenz. For example, the Ehrenbreitstein castle that is one of the largest defensive structures in Europe. This majestic building is located on a high hill; over the years of existence it has completely changed its appearance. At present, a great fortress is home to several state agencies; some halls of the fortress are allocated to ... Open »

Culture guide to Bonn. Which fascinating sights to visit once you are in Bonn: temples, churches, museums, theaters and castles. Recommendations (with addresses, phone numbers and links) on the places 'must visit' in Bonn. Plan your own city excursion by using this page info!