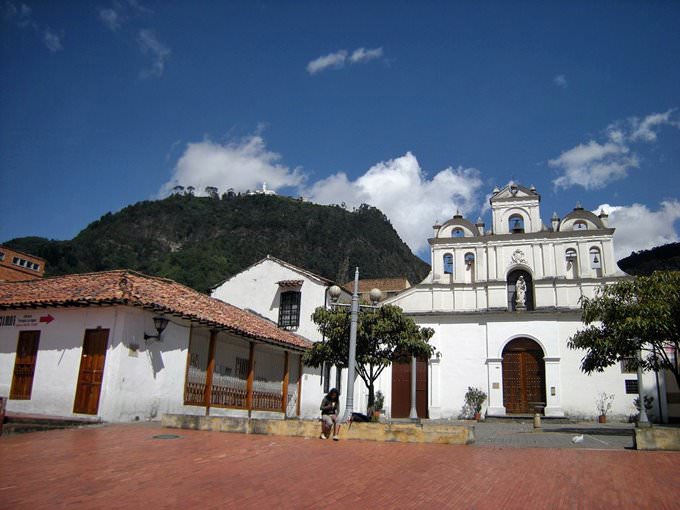 Start your observation of the city by making a walk in the central area of Bogota. Here is located the oldest square of the city called Plaza Bolivar. The square was founded in the beginning of the 19th century. In the center of the square you will find a monument dedicated to the first president of the country. Nowadays this square is a constant venue for numerous important social events and holidays. Not far away from the square you will find an ancient cathedral, the construction of which took place in the beginning of the 17th century. In 1998 the church was completely restored, so now visitors are able to see it in all its glory. Near the church have been buried several prominent political figures and artists of Colombia. The graves of these famous people are also important sightseeing objects. Make a short walk away from the square, and you will see Presidential Palace. Every day a huge number of people gather near the palace in order to enjoy its beauty. However, not the beauty of the building itself attracts such a great number of visitors. Every day here takes place a beautiful ceremony of changing of guards, which takes place daily at 17:00.
Your active city break in Bogota. Attractions, recreation and entertainment - best places to spend your day and night here
Bogotá offers a huge choice of various entertainments for those people who enjoy spending their free time outdoors, like visiting numerous interesting shops and attending fascinating …

Open
Palace of Justice is located to the north of the square. The building was severely damaged during the hostilities. However, thanks to the work of contemporary architects, the building has been fully restored and now stands in full glory. Among other attractions of the central district of Bogota we should definitely mention numerous churches, such as San Francisco, Santa Clara, La Concepción, San Ignacio, La Tercero, La Candelaria and Nuestra Señora del Carmen. Bogota is home to a huge number of ancient architectural sites that have preserved here for centuries. A beautiful mansion of Casa de Poesia Silva is a true pride of the capital. This amazing building, which is constructed in full accordance with the national traditions, amazes its visitors not only by its elegant and beautiful architectural forms, but also by its design and luxurious premises. Currently the beautiful mansion hosts the exhibition of Museum of Poetry.
Tourists should also not forget to visit Luis Angel Arango building, which currently hosts one of the oldest municipal libraries. Many interesting excursion sites are located in the district of Nueva Santa Fe. Plaza de Satander is a great place for walking. The square is a beloved place for everyday performances of street musicians. This is also a great place to purchase souvenirs. The square is surrounded by beautiful old mansions. University of Rosario is known as one of the most famous landmarks of this part of the city. Fans of art should definitely visit museum Museo de Arte Moderno, which exhibits the richest collection of art in the country. Elegant sculptures and statues, tapestries and paintings of marvelous beauty, ancient vases and ornaments – simply every exhibit in this museum is a unique historical artifact. Copyright www.orangesmile.com
Advices to travellers: what you should know while being in Bogota
1. Travelers are recommended to move around the city only during the daytime. The best way to explore the local attractions and places of interest is in a company of a group of tourists …

Open
The list of churches however does not end on this. Everyone knows the religiosity of Latin Americans, and that of Colombians is not an exception in this case. The Santuario de Nuestra Senora de Guadalupe is a beautiful church, whose most remarkable value is the monument to the Virgin of Guadalupe. The church was built in the year 1795 in the classical style. The building itself is located on a hill, due to which it can be seen from anywhere in the city. Of course the city itself can be seen in all its glory, only by climbing to the shrine on a funicular. The Iglesia Nuestra Senora de Lourdes is considered attractive from an architectural point of view. It was built in the beginning of the 20th century in a “neo-gothic” style. The church has a very good acoustics.

The highest building in Bogota is the Torre Colpatria. You can look at the city from this building, which is located at the feet of the beholder. Great views open up to the mount of Montserrat. There are several interesting palaces in the capital of Colombia. At such, the Palacio de Nariño, which is currently the residence of the Colombian president, was rebuilt in the style of “neo-classicism” in the beginning of the 20th century. Until that moment, the building was known as the house in which the family of the future reformer, Antonio Nariño, lived from 1754. Next to the palace is another interesting building called Palacio Echeverry. This building was also constructed in the beginning of the 20th century. The chosen style was “neo-classicism”. The building houses the Colombian Ministry of Culture.
OrangeSmile.com recommends best hotels in Bogota Casa Dann Carlton Hotel & SPA , Rating 9,1
Extraordinary weekend in Bogota - unusual places, services and attractions for travel gourmet
Already visited the most important sights in Bogota and now want to see them all from a bird's eye view? Go to the Teleferico cable car, and in a matter of minutes, it will take you to the …

Open
Walking through the Plaza de Bolivar, you can find a building unusual for the architecture of Bogota – namely, the Capitolio Nacional. The building is impressive with its unusually beautiful facade. It is worth noting that the square is the busiest in the city; performances, concerts, rallies, and folk festivals are often held here. Another interesting building on the square is Palacio Arzobispal, which is remarkable from a historical point of view. You will also find it fascinating to visit the Colegio Mayor San Bartolome, which is the oldest school in the capital of Colombia (it was founded in the year 1604). It can also be found at the Plaza de Bolivar. The exterior of the school is equally interesting – its facade, dome, tower.

Another place worth visiting is the Plaza de Toros Santamaria. The presence of this building in Bogota relates to the fact that the country was once a Spanish colony. In addition to bullfighting, interesting performances are often held here, you just need to follow the billboard. From among the museums, it is worth first of all highlighting the Museo del Oro – this is a kind of a trademark of the capital of Colombia, which was once considered the very Eldorado. To get acquainted with the history of the struggle of the state for independence from Spain, it is worth paying a visit to the Museo de la Indepencia Casa del Florero.

In the section below, you can get one of our excursion, activities or city discovery tours over Bogota and surroundings. Our website offers 10-30% lower ticket prices, when compared to the offline purchase on the spot.

This guide to cultural sights Bogota is protected by the copyright law. You can re-publish this content with mandatory attribution: direct and active hyperlink to www.orangesmile.com.
Bogota - guide chapters 1 2 3 4 5 6 7 8 9 10 11 12 13
Reference information
Map of all palaces

Public palaces near Bogota
♥   Palace 'Palacio de San Francisco' , 5.6 km from the center. On the map

Art galleries in Bogota and around
♥   Art museum 'Colombian National Museum' Bogotá, 5.3 km from the center. On the map

Cathedrals and basilicas near Bogota
♥   Catedral de Santiago Apóstol, Fontibón, 5.6 km from the center. On the map

♥   Catedral Castrense Jesucristo Redentor, Bogotá, 10.1 km from the center. On the map

♥   Catedral de Jesucristo Nuestra Paz, Soacha, 10.2 km from the center. On the map Photogallery of cultural heritage of Bogota

Excursions over cultural sights of neighbours of Bogota

Medellin
Built in the early 20th century, it is the largest brick church in South America. Tourists would certainly appreciate the interior of the church, each of its decoration piece is a valuable religious artifact. A great place for hiking is the Paise district, which is one of the oldest quarters of the city. Like many years ago, today you can find a huge number of craft workshops ... Open »
Cartagena
The ancient San Felipe de Barajas Castle is deservedly called the city's most interesting historic monument. Its construction began in 1533, immediately after the founding of the city, and was completed only by the second half of the 17th century. The main building material for the construction of fortification structures was shell rock. The castle is striking in its scale ... Open »
Guayaquil
In the city center, here is magnificent Parque Seminario surrounded by numerous gardens and parks. On the same square is the main religious attraction - Guayaquil Metropolitan Cathedral. The first church was erected on its site in 1547 but was heavily damaged by fire. The cathedral you can see today was built in the middle of the 20th century. Get acquainted with the ... Open »
Willemstad
The most interesting districts for travelers will be Otrobanda and Punda located on both sides of St. Anna Bay. It is here where you can find most of the architectural and historical sights. Along the canal you can see beautiful mansions dating back to the 18th-19th centuries. Today, large part of the beautiful historic buildings are converted into shops, restaurants and ... Open »
Curacao
An important object of the tour is the Senior winery that all guests of the island try to visit. It produces the Curacao liquor. Visitors of the winery will have an opportunity to observe the process of drink production. Winery is located in the beautiful 19th-century mansion. Traditionally the tour ends with liquor tasting. In the neighborhood of the capital there is the ... Open »

Culture guide to Bogota. Which fascinating sights to visit once you are in Bogota: temples, churches, museums, theaters and castles. Recommendations (with addresses, phone numbers and links) on the places 'must visit' in Bogota. Plan your own city excursion by using this page info!