It’s hard to imagine Bilbao, and Spain in general, without its famous architectural landmarks. Basilica de Begona, Teatro Arriaga, Mercado de la Ribera, City Hall, Alhondiga Bilbao, Palacio Euskalduna Jauregia, and Plaza de Toros de Bilbao have shaped the historical and architectural look of Bilbao. Let’s take a closer look at these landmarks from an unusual perspective – simply fly over the main sights! The supporting video includes a virtual tour around the above mentioned architectural landmarks of Bilbao in HD format. Below, we will add the most exciting historical facts regarding every place of interest. The overview map of all iconic landmarks of Bilbao can be found at the bottom of the webpage. 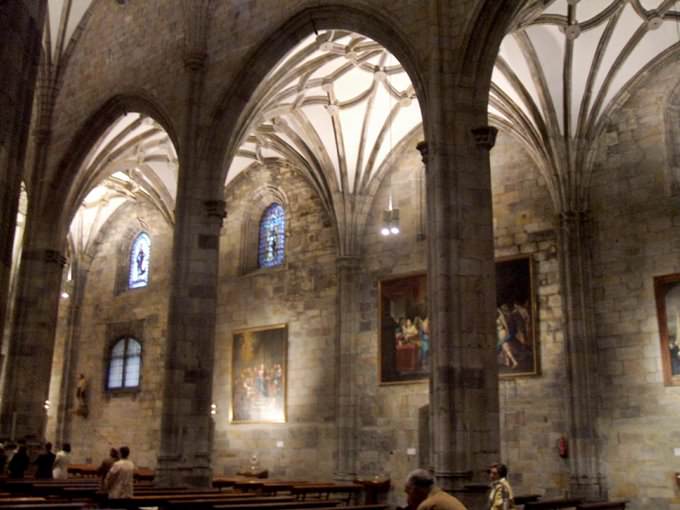 Facts:
» Believers came to the Basilica de Begona to worship the patroness of sailors, the Virgin Mary.
»  Services are daily held in the religious institution. Grand festivals dedicated to the Virgin are held here twice a year.
»  The church for her glory started to be built in the 16th century. The construction lasted a hundred years. That is why the exterior of the building combines Gothic and Baroque architectural styles.
»  In the 19th century, the clock tower was attached to the facade. There are 24 bells on the belfry. They make seven different sounds. The whole instrument weighs 1 ton.
»  The walls are decorated with convex ornaments and small shaped pillars.
»  There is a Baroque altar inside. It is gilded. The memorial statue is the wooden sculpture of the Virgin Begona.
»  In the hall, there are high drop arched doorways. They are decorated with complicated patterns. They make an impression that the petals of weird plants surround worshipers.
»  There is a tradition to call ships “Begona” or “Saint Virgin Begona”. This encourages a long voyage and protects sailors from misfortunes. 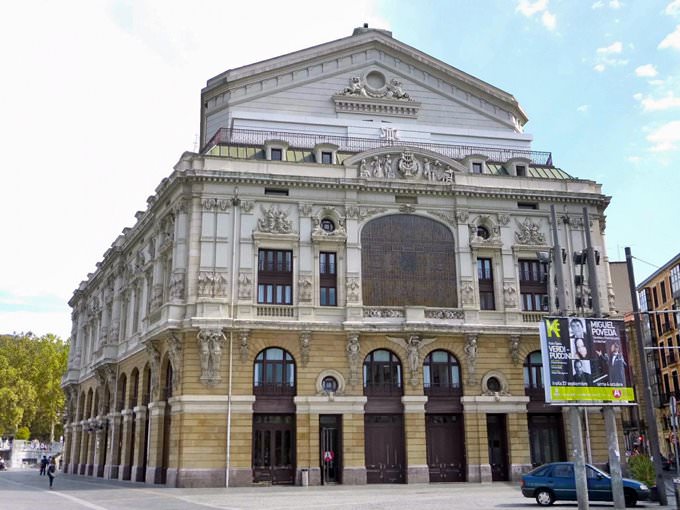 Facts:
» The city cultural institution is named after the Basque musician Juan Arriaga. There is his bust in the lobby.
»  The theatre was founded in 1890. Theatrical performances were replaced by film screening soon. Spectators were more attracted by the chance to watch films but not plays on stage.
»  The construction was significantly damaged by fires and floods. The water level was higher than the ground level. It was necessary to restore the building due to boisterous elements.
»  The updated building was constructed in the 20th century.
»  The house resembles a trapeze with its shape. The second level is much wider than the first one. There are niches in the walls. Balconies are supported by concrete constructions looking like natural stone.
»  The columns in the form of sculptures represent mighty titans holding the vault on their shoulders. Decorative figurines were specifically ordered in France.
»  The cornice separates the second and third levels. It ends with the picture of the lira. There is a clock under the musical instrument.
»  The team is famous for opera and drama performances.
»  There is an agreement with the administration that the scene is also provided for concerts and dance performances. Touring troupes from all over the world set their hearts on the stage too. 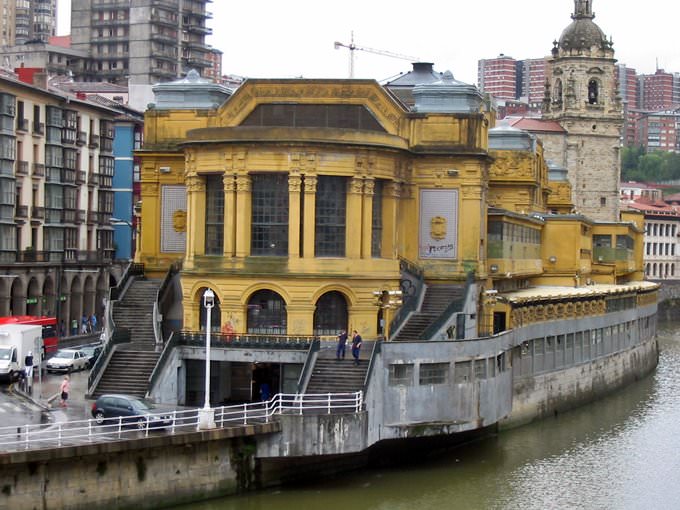 Facts:
» The three-storey building in the form of the shop at the pier is nothing but a city market. It appeared in 1929. Big stained glass windows give much daylight.
»  It is confirmed by the Guinness Book of Records that the Ribera Market is the biggest market (10 000 m2) supplying fresh products in Europe.
»  Each level has a separate section with products. The 1st is seafood, the 2nd is meat, and the 3rd is fruit, berries, and vegetables.
»  There is a restaurant in its territory. Dishes can be cooked here by special order. There is also a separate grocery shop. At the bar counter and the table, guests are offered to taste exquisite restaurant dishes.
»  The area of the food outlet lets held different events here.
»  Professional cooks have kitchen shows. During culinary shows, you can learn how to serve dishes and see how beverages and dishes are cooked. Everyone can attend cooking masterclasses. Exhibitions of wines accompanied by music are organized.
»  Business meetings are suspended for people to relax in the recreation area.
»  Local music lovers are attracted by an opportunity to listen to jazz here. 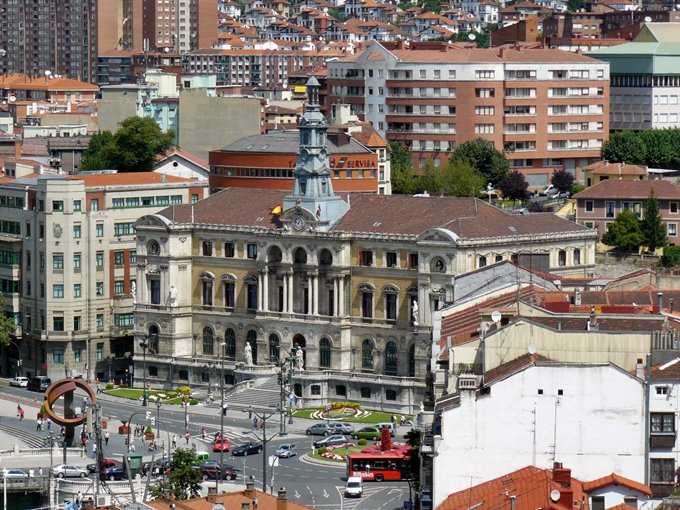 Facts:
» The old City Hall was built in the territory of the monastery that belonged to the Augustinian Order. It dates back to 1892. During the uprising of the political party in Spain (during Carlist Wars in the 19th century), the part of the construction was destroyed.
»  Balconies are attached to the facade decorated with the row of columns. Multiple sculptures along the walls depict eminent people who contributed much to the development of the settlement. The building is crowned by the chapel.
»  The Arab Hall decorated in the style Muslim rulers preferred stands out of other rooms. Now, it is a place where official meetings and weddings are held.
»  In 2011, the mayor's office funded the construction of the new City Hall. So, you can see the building of unusual shape that is quite atypical for state institutions. The construction built in the style of deconstructivism gives an impression that designed forgot about the rational use of space. In the building, there are also exhibitions, restaurants, negotiation rooms, conference halls, and offices.
»  The City Hall is located in the city center. 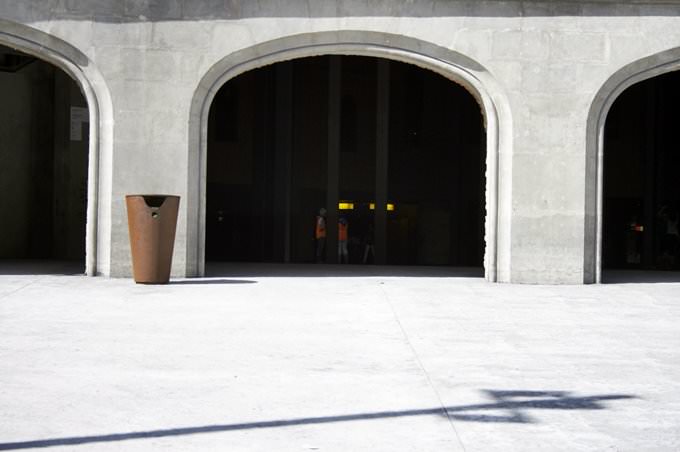 Facts:
» Alhóndiga Bilbao is a city 7-storey entertainment center. Its total area is 43 000 m2.
»  The authorities have invented €7 million for 8 years of the construction.
»  There was a wine warehouse here before.
»  The promising architect got down to business. The architect preserved outer walls and built brick constructions resembling cubes along the perimeter. Each construction fulfills its function.
»  The first one houses books, tutorials, and video equipment.
»  The second one includes a gym and a swimming pool.
»  In the third hall, there are two cinemas and an exhibition hall.
»  These block constructions are linked by flat soffits. In the atrium, there is a solarium, a restaurant, and a cafe.
»  At the first level, cube constructions are raised above the ground.
»  Over 40 columns support the platform, on which the complex is located. These pillars are quaint and distinguished by their design. The parts of the support structure are made in the Kitsch style: real chaos, luxury, and uncertain images. It is the convex bearing that resembles a samovar with its shape and it is also a long-clawed beast. Supporting pillars are made of brick and marble.
»  Visitors are welcomed by the huge picture of the sun. Facts: » The building that looks like a liner has nothing to do with the maritime theme.
»  There are a city symphony orchestra and a congress center. Palacio Euskalduna is built in a contemporary style and used for holding sessions of the representative body and concerts. There are also rows of shopping stalls and food outlets.
»  The Etxanobe Restaurant is located on the third floor. It is famous for its cuisine and even received the Michelin star for it. This award is given to cooks, whose talent is recognized worldwide.
»  The Conference Center and Concert Hall started to be built in 1994 under the leadership of famous architects. The construction lasted 5 years. The center is both a concert hall and a parliamentary institution.
»  The total area of the seven-storey Palacio Euskalduna is over 25 000 m2. It is 53 m high.
»  Its space is divided into sections. There is a main hall with 2 164 seats and two smaller rooms. There are eight exhibition halls and seven business and conference rooms.
»  The facade turns to the river. It is faced with metal silver panels in recognition of the fact that the region is famous for the metallurgical industry.

Facts: » The Plaza de Toros de las Ventas is a bullring. It was constructed in 1929.
»  It is the biggest arena in Spain.
»  The exterior of the construction combines Arab and European architectural styles. You can visit it when different events are held here.
»  The museum is open for visitors. On exhibitions stands, you can see pictures of bulls, dresses of bullfighters, curved swords, with which people attack beasts, and posters with schedules.
»  There are monuments in the territory of the complex. One of them is dedicated to the scientist who discovered penicillin. This antibiotic repeatedly saved the lives of bullfighters suffering from blood poisoning. The other monument is dedicated to the famous master. After the fight, he struck the huge beast down, turns to spectators and welcomed them. At that time, it speared him with a horn. The inscription on the monument says «Torero died - an angel was born».
»  The construction started to be built in 1761. The construction lasted over a century.
»  The building has a view of the river bank and resembles a polygon with 30 edges.
»  14 thousand people come here to watch an exciting performance.

This guide to architectural sightseeing in Bilbao is protected by the copyright law. You can re-publish this content with mandatory attribution: direct and active hyperlink to www.orangesmile.com.
Bilbao - guide chapters 1 2 3 4 5 6 7 8 9 10 11 12 13

Build your walking routes in Bilbao on the landmark map Architectural landmarks in the regions around Bilbao

San Sebastian
To build a summer cottage, the members of the Spanish royal family purchased the land at the coast of the bay. The residence was finished in 1893. The three-storey palace is located in the upper city. Servants lived on the upper floors. The basement was used for household needs. It is just a few meters from the beach. To link Antiguo with the other district of the city, the tunnel for vehicles was specifically built. The tunnel is dug ... Open »
Bordeaux
Cathedrale Saint-Andre was reconstructed many times. According to the chronicles, there had been buildings built in the 3rd century at the site. This construction was first mentioned in chronicles in 814. The Normans destroyed it. At the beginning of the 11th century, the first stone was laid in the cathedral's foundation in commemoration of the marriage of Louis VII and Eleanor of Aquitaine. In 1130, the northern Porte Royale ... Open »
Madrid
Palacio de Cibeles was originally designed as the central office of the telephone service, post and telegraph of Spain. The post office was built in 1918 and was called the Palace of Communication. Palace of Communication now houses the City Hall. This monumental building, decorating the area, represents one of the four pillars of modern civilization, power. Palacio de Cibeles consists of two buildings integrated with each other. This ... Open »
Barcelona
Museu Nacional d Art de Catalunya was created by merger of the collections of the Museum of Modern Art and the Museum of Art of Catalonia. The Romanesque Collection of the museum is considered one of the most complete in the world. It was formed on the basis of the unique Romanesque frescoes department; they are exposed at an appropriate architectural background. That’s the largest museum of Catalonia and the most important center of Spanish ... Open »
Porto
The Porto Cathedral is the oldest and most revered in the city. It started to be built in 1110. An urban settlement was gradually growing around it. For centuries, a lot of interesting events took place at the cathedral. In 1387, King John I and English Princess Philippa of Lancaster got married. The son of John I, Henry, was baptized here. He was called “a sailor”, although he never took part in expeditions but organized such ... Open »
OrangeSmile.com - online travel reservation expert providing reliable car rental and hotel booking services. We feature more than 25.000 destinations with 12.000 rental offices and 200.000 hotels worldwide.
Secure Server