Cuisine of Bilbao for gourmets. Places for dinner - best restaurants

Open
Beltz The Black should be definitely mentioned among the most prestigious restaurants of the city. The restaurant is easily distinguished not only by the rich choice of national dishes, but also by a stylish decoration of its hall. The restaurant’s interior is made in black and white, even the food here is served on black and white plates. In high floor vases you will are always find magnificent bouquets of white lilies, but white curtains remain the most important decoration of the restaurant’s hall. Besides traditional dishes the restaurant’s menu is full of signature dishes that will surely delight the hotel’s visitors. Many of the dishes offered are exotic delicacies. La Ría is a modern restaurant that can accept as many as 250 visitors at a time. Its spacious halls are simply perfect for special occasions. The restaurant also specializes in cooking dishes from the Spanish cuisine, but it never ceases to amaze guests by its signature food masterpieces. Many connoisseurs of cuisine call La Ría the most outstanding restaurant in Bilbao that is notable for its innovative cuisine.
Fans of European cuisine will surely like restaurant La Perqola, which is located within a walking distance from the city’s center. It is worth noting that in this restaurant is established a dress code, so visitors are recommended to choose their clothes very carefully. When it comes to describing the most popular café shops of the city, we definitely can’t fail to mention Café Boulevard, which greeted its first customers yet back in 1971. In the morning and during the lunchtime numerous employees from the nearby offices come to this café to enjoy a short break from a busy working day. The café is also very popular among visitors. In the evening Café Boulevard attracts its guests by truly enchanting tango evenings, during which experienced dancers give master classes and showcase their talents to the audience. Guggenheim restaurant is a no less popular place, the location of which can amaze simply everyone – the restaurant occupies an ancient museum. Among the specialties of this dining facility you will find a roasted pig with spices, and caramelled fruits remain the most popular dessert among guests. Copyright www.orangesmile.com
Old hotels keeping the history of Bilbao
Bilbao is not deprived of charming hotels, behind the walls of which is an amazing historic atmosphere. Fans of country holidays should pay attention to Hotel Artetxe housed in a restored …

Open
Seafood is the basis of the national cuisine in Bilbao. Various vegetable garnishes are a very popular addition to fish in the restaurants that specialize in the national cuisine. It is important to mention that many restaurants specializing in fish and seafood partner with local fishermen. This guarantees that finest and freshest fish and seafood are always delivered to a café or a restaurant in time. In fact, fish and seafood are quite often never refrigerated – local fishermen deliver their catch directly to the cuisine where chefs start cooking it. 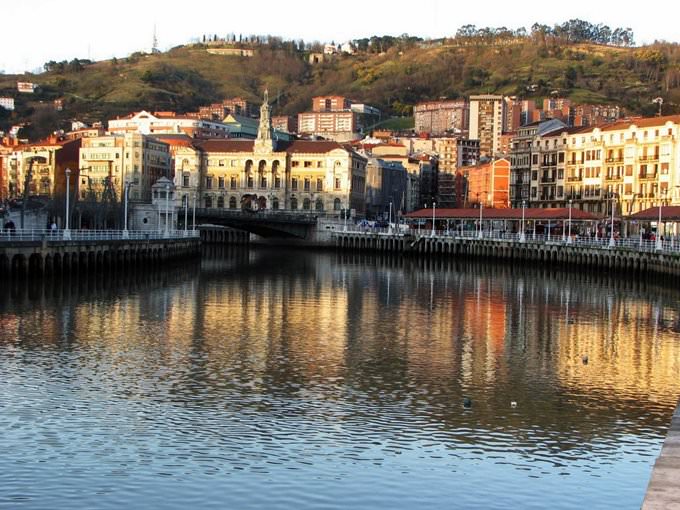 Fans of traditional Spanish tapas snacks will have an opportunity to try a special variety of this popular meal in Bilbao – Pintxos. This is the name for small sandwiches that can contain various ingredients. The delicious snack is available in many local restaurants and bars, and its price will not ruin any budget.
OrangeSmile.com recommends best hotels in Bilbao Hotel Abando , Rating 8,4
Best hotel choice for romantic escape, wedding or honeymoon in Bilbao
In Bilbao, it is quite easy to find a hotel suitable for a romantic stay. For many years, designer Sercotel Hotel Gran Bilbao has been in demand among couples. Its rooms are decorated in a …

Open
Cod remains the most popular dish in local restaurants. It can be cooked in a number of ways, including quite original ones, for example, cod baked in clay pots. Olive oil and garlic are often the only ingredients used with the fish, so it keeps its original taste and aroma. Local chefs use tuna to cook a very interesting soup that is called Marmitako. It is possible to find this soup in virtually any high-class restaurant in the city. Fans of unusual dishes will like horse mackerel fish that is usually served with a special green sauce made of herbs. When it comes to describing fine delicacies in Bilbao, travelers are recommended trying Changurro crab. As a rule, local restaurants bake crabs. 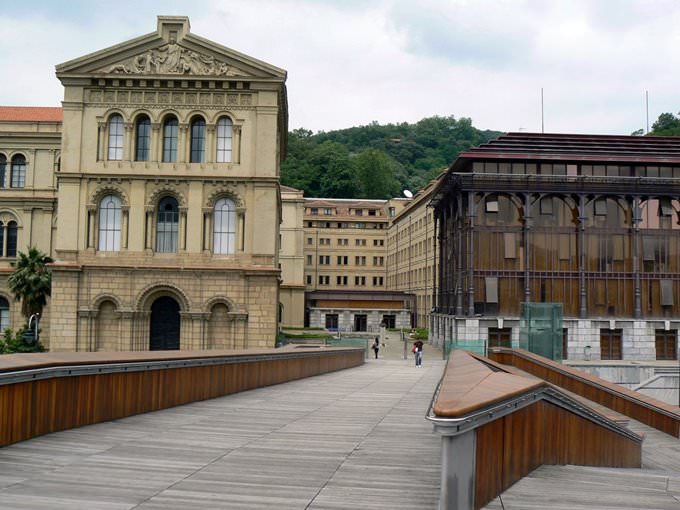 The choice of delicacies is also incredibly high in Bilbao. Travelers will like interesting rice cakes. Cherry pie remains one of the most popular desserts that locals like very much. Small street confectioneries also offer traditional Brioche buns. In cafés, travelers will find Karolina cakes that are not only very delicious but are also attractive. All kinds of éclairs are also very popular in Bilbao. Travelers interested in something more unusual should try Cuajada. It is a popular dessert in Bilbao that is made of sheep milk. Bilbao is also home to some great wine. For example, local restaurants offer delicious Txakoli wine with seafood.

This guide to cuisine and restauraunt in Bilbao is protected by the copyright law. You can re-publish this content with mandatory attribution: direct and active hyperlink to www.orangesmile.com.
Bilbao - guide chapters 1 2 3 4 5 6 7 8 9 10 11 12 13

Where to go for dinner in Bilbao: recommended cafe and restaurants

♥   Restaurant 'Zarate' Bilbao. Type - Traditional cuisine. 2.3 km from the center. On the map

♥   Restaurant 'Yandiola' Bilbao. Type - Traditional cuisine. 2.4 km from the center. On the map Searching where to eat - restaurants and cafe on Bilbao map

Cuisine and restaurants in the neighbours of Bilbao

Basque Country
Then again, if you want to have a relaxed evening, enjoying your food, interior, and music, and not going around the bars, don’t worry, you won’t be disappointed in the Basques’ culinary arts. If you are a real gourmet, you should definitely visit at least one of the Michelin star restaurants. There are ten of them in San-Sebastian and Bilbao – from Azurmendi, famous ... Open »
Santander
Traditional dishes of Spanish cuisine are served in the Machichaco El Machi restaurant featuring a unique interior design. A hall of the restaurant is designed in blue and white, aquatic colors. The interior design completely reflects a specific character of the restaurant. Apart from popular treats of Spanish cuisine the menu of the eating house offers excellent seafood ... Open »
San Sebastian
Pinchos is one of the ethnic dishes being of extreme popularity among foreign guests. It is a small canapé added with various stuffing. Local residents know over a hundred recipes of pinchos. This tasty ethnic treat is often compared to another popular Spanish dish named tapas. However genuine connoisseurs of local cuisine know the difference between these two ethnic treats ... Open »
Biarritz
You can continue your introduction with the culinary delights of Basque cuisine in the restaurant called Le Bistrot d'Antan. The menu of the restaurant features numerous sorts of exotic fish and rare varieties of seafood, which are prepared in accordance with special original recipes by the local chefs. If you prefer budget dining facilities, Cafe En Aparthé is one of the ... Open »
Gijon
Near the cave you can see the old building housing a hotel. A few hundred years ago, ice cream makers lived in that house; it was a kind of summer residence for them. Foreigners can taste the horchata ice cream cooked following old recipes at any local cafe. Cozy Xixona cafes are among the most popular. Gijon is famous not only because of its ice cream; it is producing a ... Open »

Travel notes on best cuisine and restaurants of Bilbao (Spain) on OrangeSmile.com. Famous recipes and traditional dishes and courses in Bilbao restaurants. Where to eat - our recommendations on popular places in Bilbao, where you can taste delicious meal and also spend a good time with your friends.