Video of flights over top monuments of Berlin in HD format.
Use 'Full Screen' mode.
Our suggestion on the way to observe the most important architectural landmarks of Berlin is very simple – fly, read, watch. Thanks to our original 3D technology of flying over cities, you will be able to “visit” (see the video) and watch the most important architectural landmarks of the city - Reichstag building, Rotes Rathaus, French Cathedral, St. Hedwig Cathedral, Soviet War Memorial and many others. We have carefully selected the supplementary information for each of them, including interesting historical facts and a collection of photographs. Additionally, we have placed all main sights on the map of Berlin below, since this information can be useful when you plan your walking routes in Berlin. 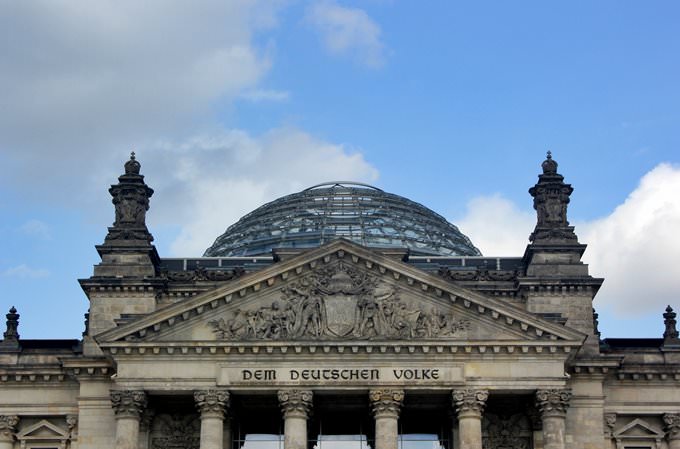 Facts:
» The Reichstag building symbolizes Germany; quadrangular base represents four areas of Germany, and the dome emblematizes the unity of the imperial power.
» Reichstag is not only the building, where the German Parliament sits. The museum houses the modern art collection, which is one of the most important in Germany.
» The Reichstag is connected with other parts of the parliamentary complex by underground corridors and bridges over Spree River.
» The Reichstag was restored after the World War II, but not completely. A part of the wall of the building was left in memory of the Soviet soldiers who come down to Berlin; there are inscriptions of the Soviet soldiers where they captured their memories.
» There is the mirrored cone in the center of the glass dome of the Reichstag. Bouncing off, the daylight falls into the plenary hall of the Bundestag. 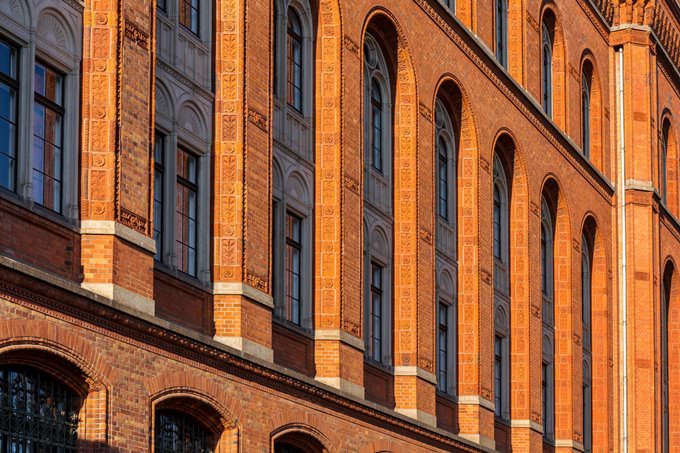 Facts:
» The Rotes Rathaus is named so because it was built of traditional unbacked red bricks.
» The three-story town hall is topped by a tower of 74 meters high. In order to climb to the top platform of the tower, it’s necessary to overcome the 287 steps of the spiral staircase.
» City Clock located at the Rotes Rathaus has two bells: the large bell, beating the clock is set to D, and a small bell, batter quarter of an hour is set to D.
» Top of the Town Hall is protected by the traditional symbol of Berlin, a bear; exactly there are eight of them. These three-meter bears represent Ascanio dynasty.
» In the postwar years the Berlin Town Hall has become an object of ridicule: Berlin socialist office was working there, and saying Red Town Hall West Germans invariably mean politicians, but not color.
» During World War II, the town hall was destroyed. In the 1951-1958 restoration with a partial change in the interior was held. 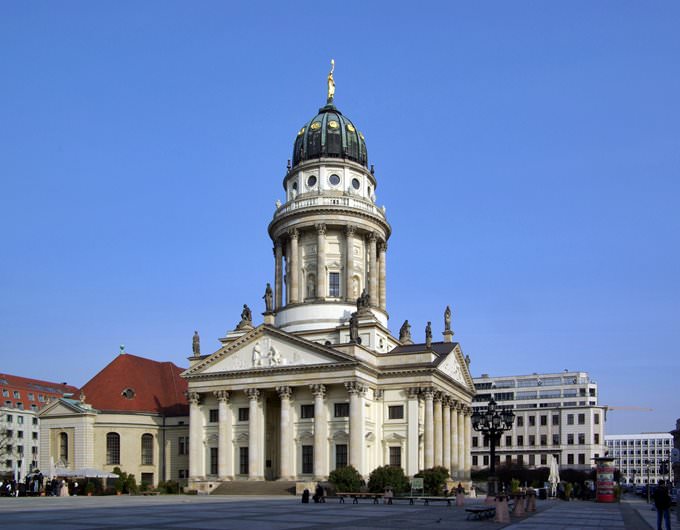 Facts:
» French Cathedral was originally conceived as a church for the Huguenots, refugees from France. Their number at the beginning of the 13th century was about a quarter of all the inhabitants of Berlin.
» The building is called cathedral, although there never was episcopal liturgy.
» The building was heavily damaged during World War II, but later it was completely restored.
» Currently French Cathedral is not only the single place of the convocation of the Evangelical church of the whole of Germany, but also one of the most important monuments.
» The tower built by Gontard and Unger features a viewing platform. This is where you can see the historic center of Berlin in all its glory. 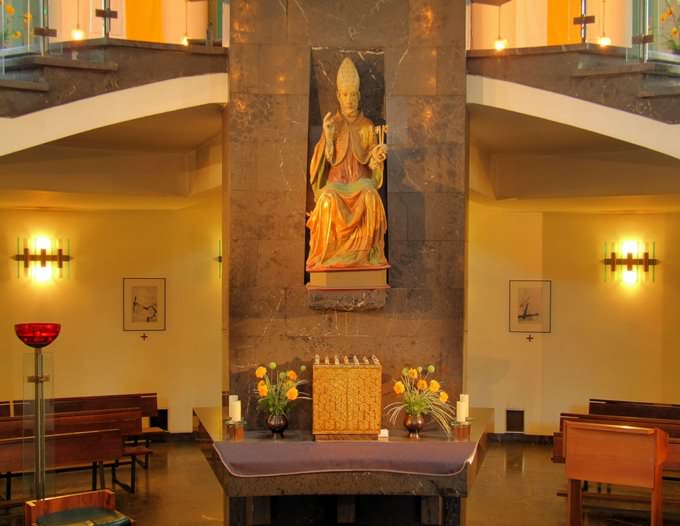 Facts:
» Cathedral of St. Hedwig is the Roman Catholic cathedral located on Berlin's Bebelplatz Square. That’s the main Catholic church in Berlin, the center of the Catholic episcopate and residence of the Archbishop of Berlin.
» It was necessary to propose numerous Catholic immigrants who arrived in Berlin, especially from Silesia, a place to worship, so the cathedral was dedicated to St. Hedwig Silesian.
» The Cathedral of St. Hedwig has been burned to the ground in 1943 during air raids on Berlin and was completely rebuilt lately.
» It took a long time from 1747 to 1773 to build the cathedral, as construction was delayed because of lack of funds. Donations were collected all over Europe.
» Under the cathedral there is the crypt that sometimes serves as a baptistery and confessional. It also served as a place for the burial of the Berlin archbishops and Catholic martyrs who died during the Nazi period. 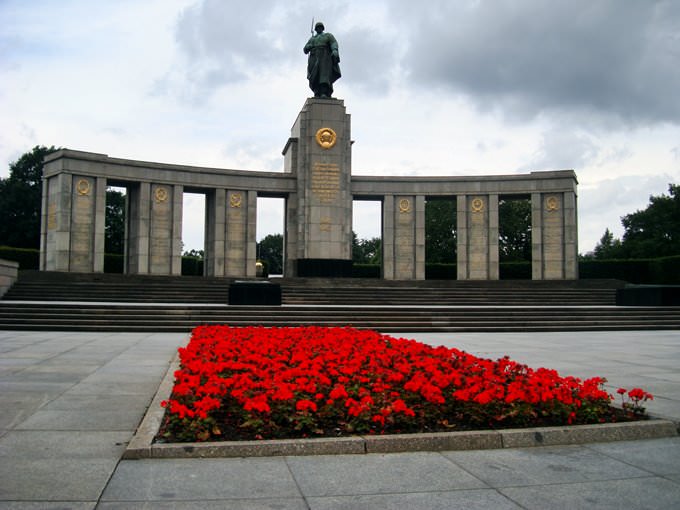 Facts:
» Soviet War Memorial was erected in 1945 in memory of the Soviet soldiers who died in battles of World War II.
» In memory of the 75 thousand Soviet soldiers killed during the storming of Berlin, three monuments were built in the city at the end of World War II. These memorials are not only the monuments of the great victories in Germany, but also military graves.
» The central part of the memorial is a concave series of columns with a large central column, which is the pedestal for the eight-meter bronze statue of a Soviet soldier. A rifle on his shoulder emblematizes end of the war.
» Inscriptions on the pillars tell us about the different branches and store lists of the fallen soldiers. On both sides the monument is guarded by two tanks and two guns, which took part in the Battle of Berlin.
» There are graves of fallen Soviet officers to the right and to the left of the main walk. Behind the soldier there is a small park containing remains of Soviet soldiers.
» For many years the grounds of the memorial have been a Soviet enclave on the territory of the former British sector of occupied Berlin. 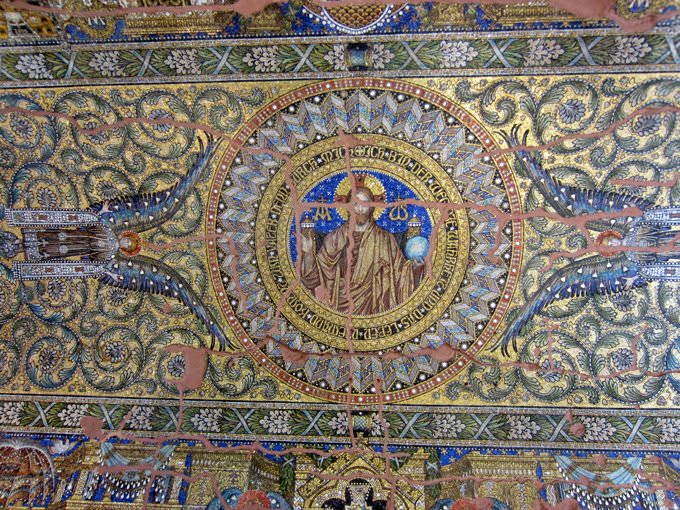 Facts:
» Berliners call the old Kaiser Wilhelm Memorial Church ‘the hollow tooth’.
» The Church of Kaiser Wilhelm was destroyed in the bombardment. Church towers weren’t totally restored leaving the ruins of the edification for future generations. Today, the church is the Kaiser Wilhelm Memorial in memory of World War II.
» Kaiser Wilhelm Memorial Church is known worldwide for its blue glass partitions. Three thousands of glowing blue stained glass windows give the space an unusual atmosphere.
» Painting of Pastor Kurt Royber, Stalingrad Madonna, made with charcoal on the back of the Soviet card is another reminder of World War II. For more than 40 years Stalingrad Madonna adorns the wall of the Kaiser Wilhelm Memorial Church.
» On the ground floor of the church tower there is an exhibition dedicated to the history of this temple. The sculpture of Christ once adorned the altar was found among the exhibits, survived from bombing. The statue is 4.60m high and weighs about 6 kilograms.
» Tourists called the restored and renovated Memorial Church ‘Blue Church’ because of the glowing blue light provided by glass. The secret lies in illumination; light sources between two walls separated by a distance of 2.70 m from each other send light to glass pieces inserted in countless concrete cells, turning the glass into mysterious blue. 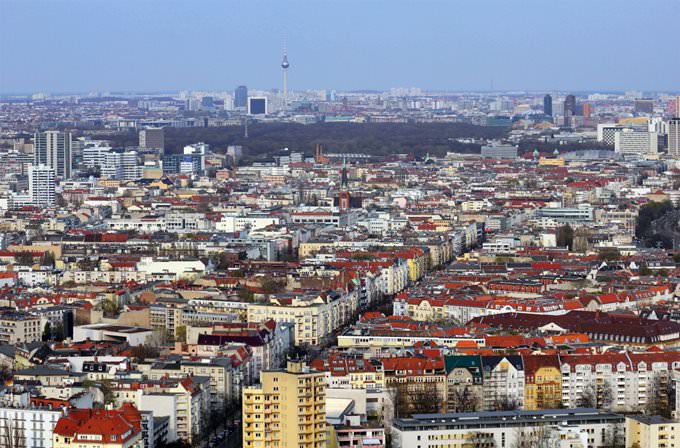 Facts:
» Funkturm Berlin is one of the most recognizable symbols of Berlin.
» Berliners jokingly call it ‘the cornstalk radio tower’.
» The Funkturm Berlin was erected in 1924-1926 and opened September 3, 1926 on the occasion of the great German Funkausstellung.
»  The Radio Tower performs several functions: it’s a carrier of the antenna, the signal tower for aircraft and an observation deck with a restaurant.
» The height of the tower with antenna is 147 m, and viewing platforms can be found at a height of 48 m, 52 m, 122 m and 124 m.

Build your walking routes in Berlin on the landmark map Architectural landmarks in the regions around Berlin

Magdeburg
The cathedral is named after Saints Catherine and Maurice. There used to be a basilica here. After the fire of 1209, the archbishop commissioned the construction of a new cathedral. Having travelled a lot, he was aware of the popularity of Gothic and was eager to create a Gothic church too. It is now considered one of the oldest buildings of such style. The construction lasted for over three hundred years and was completed in 1520. ... Open »
Leipzig
In 1897, town authorities intended to open the New Town Hall. The main requirement is that the new building must resemble the former one. So, it was built in eight years. Its form is complex. There are three indoor patios (courtyards). The complex occupies 10 thousand m2. The opening ceremony was visited by the Saxon King. External walls are decorated with sculptures and bas-relief pictures. There is a 114-meter tower in the center of the ... Open »
Dresden
The Frauenkirche, which is translated from German as the Church of the Virgin Mary, is one of the most significant Lutheran churches in Dresden. The modern building was rebuilt at the site of an old sanctuary in 1995. When it was being reconstructed, 40% of old construction materials were used. The original 95-meter church was destroyed completely in the period of the Second World War when Dresden was bombed in 1945. The church is the third ... Open »
Hannover
The New Town Hall was built at the beginning of the 20th century. With its elegant exterior, it looks like an ancient castle. It was constructed on the marshland, so the foundation of the building is supported by 6 000 beech piles. The opening ceremony was visited by the last Emperor Wilhelm II. Rooms, graceful staircases, and balconies are decorated with lots of sculptures and bas reliefs. In the main domed tower, there is an observation ... Open »
Hamburg
The new luxury building of the Hamburg Townhall was built in the 19th century on the site of an old burned-out building. Representatives of both legislative and executive authorities of Hamburg hold meetings there. The majestic town hall is decorated with huge statues of emperors on the front, and crowned with the baroque tower of 112 meters. The Hamburg Townhall has 647 rooms with luxurious interiors. The Kaiser Hall with rare leather ... Open »
OrangeSmile.com - online travel reservation expert providing reliable car rental and hotel booking services. We feature more than 25.000 destinations with 12.000 rental offices and 200.000 hotels worldwide.
Secure Server