Sightseeing in Austin - what to see. Complete travel guide 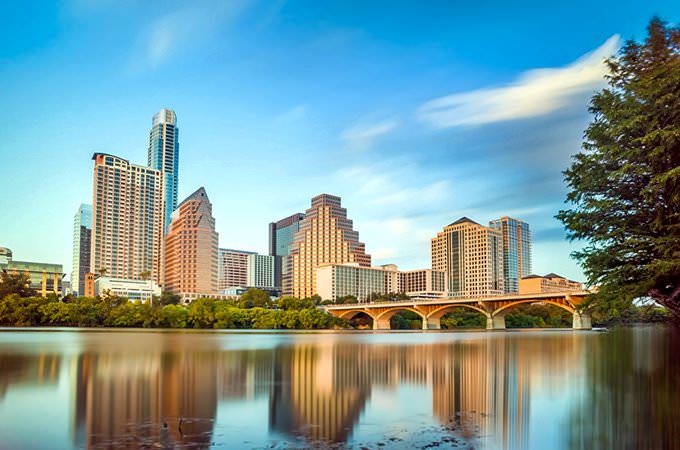 Do you want to travel across the United States but do not know the city to start from? We suggest making your choice in favor of Austin, the capital of Texas. The city got its name to honor Stephen Austin. Nowadays, the city is famous around the world as a musical center that regularly hosts different events. People, who have already visited different cities in the United States, often call Austin the best place to live.
The land that is now the territory of the capital of Texas – Austin – became popular at the beginning of the 16th century. Spanish sailors thought they would become rich in this part of the world due to large deposits of gold. However, the Spanish found something completely different. Since ancient times, cannibal tribes inhabited this land, and they were not happy to see the uninvited guests. Starting from this period, the indigenous people and conquistadors started a bloody war.
In 1835, the northern bank of the Colorado River became the location of a new village, Waterloo. This happened right before the start of the Texan war for independence. After the war, the state could become independent, and so it needed to select the capital city. Vice-president Mirabeau B. Lamar offered Waterloo. The settlement’s location was the first thing that attracted the politician – the village was right in the center of Texas. Besides this, mild climate and spectacular views of the nearby hills, in opinion of Lamar, could draw the attention of foreign citizens. Copyright www.orangesmile.com
Many people didn’t like this decision, especially those who considered Huston to be a more fitting choice. However, Lamar’s decision was approved, and Waterloo became the capital. Since that time, the village has changed its name to Austin to honor the name of a founder of this American state. Even when the region became a part of the United States of America, Austin remained the capital. The 50s of the 19th century were the time of multiple conflicts in different regions of the country. This caused the division of Texas. Austin became an important center of manufacturing weapons and ammo for the army. 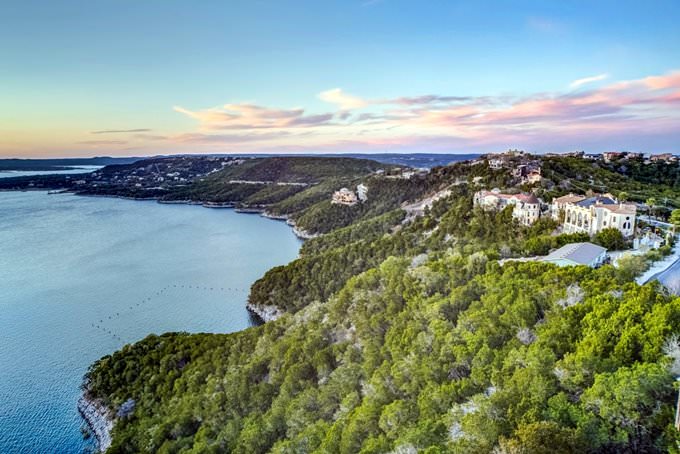 Consider visiting the stunning Paramount Theater during your stay in Austin. It is situated in the central part of the city. This gorgeous building in Renaissance style is not so old; it was built at the beginning of the 20th century. Despite such a young age, this cultural establishment is very important for the area because the theater hosted many important events in the life of the city. During a visit to the city, you won’t fail to notice perfect acoustic properties of the building. Its architecture attracts all guests of the city with its unusual beauty.
Currently, the Paramount Theater continues its active life. The theater’s repertoire has been incredibly diverse over the last 90 years: vaudevilles, silent movies, modern blockbusters, various performances of musical and dancing bands, and many interesting Broadway plays. Since the 70s of the previous century, the theater has been a registered historical landmark of the national level. The city’s authorities make sure that the building doesn’t lose its beauty and the theater keeps excited generations of Americans. 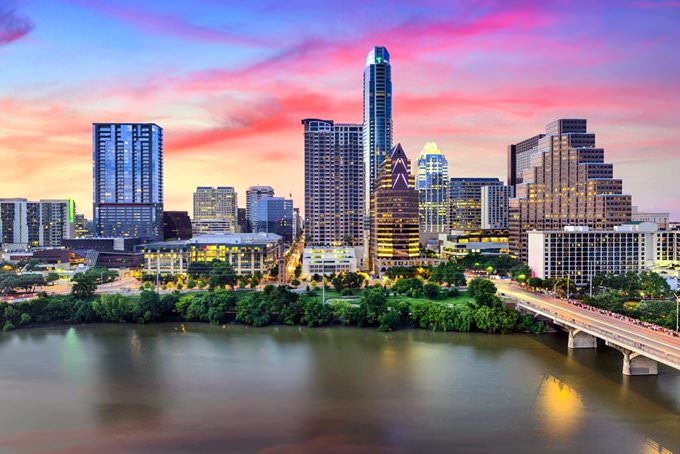 The Texas State Capitol in Austin is another important landmark that tourists shouldn’t forget to visit. In 1888, the beautiful building with Renaissance style elements was like a giant between other significantly lower constructions. When looking at the Capital’s façade, visitors may notice round-shaped arches and perfect symmetry. Red granite covers the building from the outside. The Texas State Capitol has a height of 95 meters.
When visiting the capitol, pay your attention to the floor with the national emblem. This was the official emblem of the Republic of Texas before the time when the city became a part of the United States. Moreover, every visitor has an opportunity to be present at the sessions of the local government. There is a large balcony at the perimeter of the building. There a statue of liberty holding the star of Texas on the roof of the building. 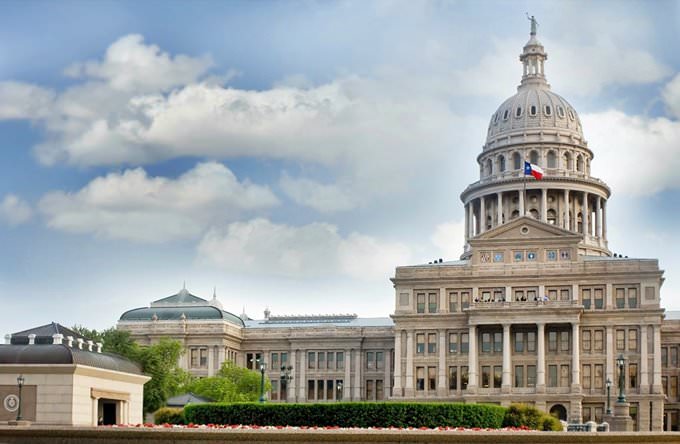 The capital city has its own international airport situated approximately 10 kilometers from the central part of Austin. Many international air carriers have direct flights to this city in Texas. However, travelers from certain cities still need to make a change. By train, it is possible to get to the city from Chicago. If you enjoy traveling by bus, consider buying tickets to comfortable intercity buses. Austin has a bus connection with San Antonio, Dallas, Huston, other cities, and Mexico.
This guide to iconic landmarks and sights of Austin is protected by the copyright law. You can re-publish this content with mandatory attribution: direct and active hyperlink to www.orangesmile.com.

City tours, excursions and tickets in Austin and surroundings

Shopping streets in Austin
♥   Shopping area ' Rainey Street' Austin, 1.1 km from the center. On the map

National and city parks around Austin
♥   Wilderness Park 'Barton Creek' , 6.1 km from the center. On the map

Art galleries in Austin and around
♥   Art museum 'Austin Museum of Art' Austin, 0.2 km from the center. On the map

Sights around Austin from our guide 'Extreme places on Earth' Distance from Austin center - 38 km.
While the access to the pool was open, the quality of water became much worse. Experts believe that over the years, the water will be cleansed by natural means, but an access to the lake must be closed. Despite the fact that you can’t swim in a unique natural pool today, guided tours are still held there. Hamilton Pool Preserve can be visited by anyone. … Read further Search touristic sites on the map of Austin

Sightseeing in regions nearby Austin

San Antonio
To the service of modern travelers, there are several unique historic hotels, some of which are record holders from The Guinness Book of World Records. Fairmount Hotel is one of these exceptional places. Initially, it was opened in 1906. However, not everyone knows that the legendary hotel has changed its location since 1985. It was literally moved three blocks, so it ... Open »
Houston
Millions of people come to this city to visit magnificent Houston museums. The most popular museums of this city are Museum of Natural History, Museum of Modern Art, Museum of Visual Arts, and more. Only the internationally famous Houston Zoo can compete in popularity with these famous museums. The parks of the city are also known for their beauty and unique floral ... Open »
Texas
Many attractions are represented in Dallas. The city has been founded in the mid19th century; from a small trading settlement it has turned into a major metropolis. Today, you can see shining skyscrapers, world-class shopping malls and restaurants at every step, as well as the most luxurious hotels. Among the most prominent monuments of modern architecture, Bank-of-America, ... Open »
Dallas
Buildings created in modernist, neoclassical, and Victorian styles are main sights of Dallas. Historical buildings are mainly concentrated on Swiss Avenue. In the center of this region of Dallas are located guarded commercial buildings, the creation of which lasted from 1880 to 1950. Santuario de Guadalupe cathedral is considered the oldest building of Dallas; it was built in ... Open »
Monterrey
It won’t be an exaggeration to say that Monterrey is the most progressive city in Mexico. Visitors will find numerous tourist complexes, hotels and inns in Monterrey. Due to the fact that the city is perfectly planned, the observation of local sights and memorable places is very convenient. The choice of modern shopping malls, restaurants and entertainment venues, cultural ... Open »

All about Austin, USA - sightseeings, attractions, touristic spots, architecture, history, culture and cuisine. Prepare your trip together with OrangeSmile.com - find out the 'must see' things in Austin, which places to visit, which excursions to take, where the breathtaking views are waiting for you. Planning your trip with this travel guide will help your to get the most out of Austin in few days.