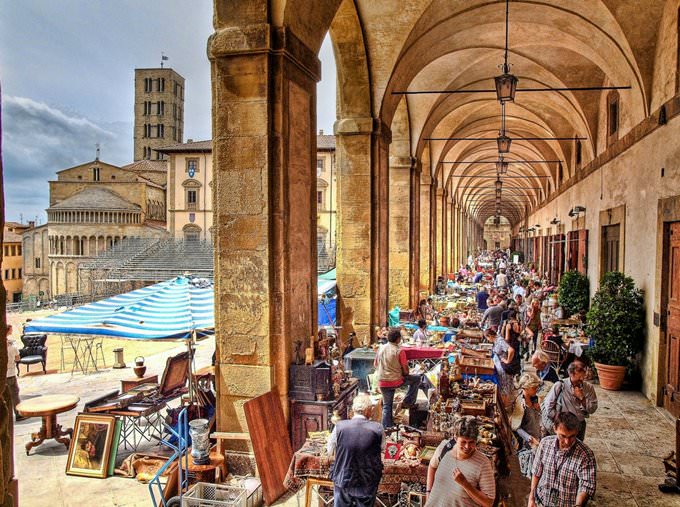 Arezzo is a city with many interesting traditions and celebrations. It’s a fantastic place where tourists can see festivities that have appeared yet in the middle ages. Generations of local people have cherished traditions of their predecessors, so they try to follow all rituals and keep them unchanged for centuries. Giostra del Saracino or Joust of the Saracen is, without a doubt, one of the most interesting national celebrations. The event takes place two times a year – on the third weekend of June and the first weekend of September.
Guide to Arezzo sightseeing - things to see and to visit
Arezzo is a small and cozy town that has managed to keep its medieval glory tenderly and cover it with wonderful modern tendencies. The most notable place from the historic point of view is …

Open
According to the historical data, the first tournament was held in August 1535. The first holiday was dedicated to St. Donatus, the patron of the city. However, some scientists think that competitions of such kind appeared much earlier in Arezzo. The tournament resembles the traditional entertainment of knights, who polished their skills by piercing rag dolls with spears. Steadily, regular training of knights became a popular celebration, and many local people gathered to see it. The tournament was revived at the beginning of the 20th century, and, currently, it is one of the most famous and popular events in Tuscan.
The celebration starts with a solemn procession of knights. As a rule, nearly three hundred people in antique costumes participate in it. Local people take on fancy dresses and walk on the main streets of the city. Equestrians with colorful flags finish the procession. The area near the cathedral is the epicenter of the celebration. The bishop blesses knights, and the festive concert starts after that. The joust starts in the afternoon. As a rule, eight knights participate in it. The main aim of participants is to hit the rotating shield while moving on horseback at full tilt. The quickest and most skillful knight gets the main trophy – a beautiful golden spear. This interesting and old celebration attracts many tourists who want to indulge in the atmosphere of the medieval times at least for a day. Copyright www.orangesmile.com
Cuisine of Arezzo for gourmet with top restaurants and cafe
Minimalism is the main distinguishing feature of local cuisine. Local chefs pay attention to the taste of dishes first and foremost, while beautiful décor and unusual serving are considered …

Open
Of course, Giostra del Saracino is the most famous festival of Arezzo. Other events are less known, but many of them are no less interesting to attend. For example on the third Sunday of June, local people organize a feast to honor Madonna delle Grazie del Rivaio. This event, which appeared many centuries ago, usually takes place in Piazzale Garibaldi. Local people from three districts, namely Porta Romana, Porta Fiorentina, and Rione Cassero, dress in traditional costumes and parade on the main streets of the city, holding colorful flags. 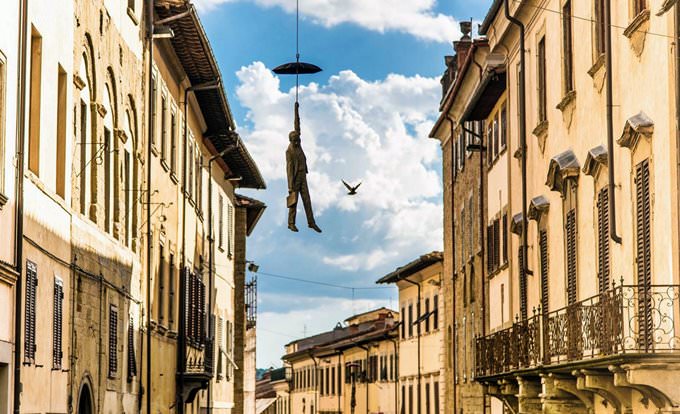 The nearby town of Lucignano also has an interesting celebration - Maggiolata Lucignanese that is held on last two Sundays of May. The Maggiolata is an ancient celebration that is linked to an old Tuscan tradition of greeting the new summer season and saying goodbye to the winter. The Roman church adopted the pagan tradition of asking supreme forces for a good harvest and turned it into a wonderful holiday. Nowadays, the Maggiolata includes various parades, performances, and concerts of folk bands from different parts of Italy.
Excursion over cultural sights of Arezzo - 'must visit' points of interest
In order to see all landmarks of Arezzo, tourists will need more than one day full of excursions. Start your observation of the city from the Basilica of St. Francesco. The beautiful …

Open
If you happen to visit Arezzo at the end of May, check the date of Rievocazione Storica della Battaglia of Scannagallo. This fantastic event is held either on the last weekend of May or on the first weekend of June in Pozzo della Chiana, a small town just 30 minutes (less than 30 kilometers) away from Arezzo. In 1554, Pozzo della Chiana was the battlefield for military actions between Florence and Siena. That war is portrayed in the famous fresco by Giorgio Vasari, Sala dei 500, and is exhibited in Florence. Local people still remember about those days, so they decided to organize a historical re-enactment. After long and careful preparation, the first re-enactment was held in 2001. Nowadays, it’s a large and very popular event that tourists will find very exciting to attend.

This guide to traditions and festivals in Arezzo is protected by the copyright law. You can re-publish this content with mandatory attribution: direct and active hyperlink to www.orangesmile.com.
Arezzo - guide chapters 1 2 3 4 5 6 7 8 9 10 11 12 13

Cathedrals and basilicas near Arezzo
♥   Basilica di S. Domenico, Arezzo, 1.5 km from the center. On the map

♥   Basilica di S. Margherita Penitente, Cortona, 24 km from the center. On the map

♥   Concattedrale di S. Giovanni Evangelista, Sansepolcro, 25.1 km from the center. On the map

Survived castles around Arezzo
♥   Castle 'Castello di Rondini' Arezzo), 1.7 km from the center. On the map

♥   Castle 'Castello di Valenzano' Subbiano, 17.5 km from the center. On the map

Unique landmarks in Arezzo and around Distance from Arezzo center - 46.2 km.
The main value of the city is the historical monuments. Right in the centre of Siena has placed the historical Piazza del Campo. Near you can see the wonderful Palazzo Pubblico. It’s an outstanding example of the Gothic architecture of the 13th century. Today some parts of the old palace are turned into a museum where you can find the collection of artefacts and ancient sculptures. One of the most beautiful architectural monuments is the Siena Cathedral. It has placed on the Piazza del Duomo, the highest place of the city. … Read further Distance from Arezzo center - 46.4 km.
Pius PP. II was born there and did his best for converting the village into a luxurious town. Pienza was the first European town which was built according to the accurate plan. Later all cities were built in such way. There were saved the Medieval buildings, today they are of a great value. In the centre of the historical area has placed a wonderful conciliar Church and several marvellous palaces. … Read further Distance from Arezzo center - 58.7 km.
Legend says that Santa Croce was founded by the main Catholic saint Franciscus Assisiensis. The church was decorated by the best Italian artists and sculptors. Many of their masterpieces we can see within thousands of years. Today the main decoration of the Basilica is the delicate stained-glass windows, the main altar that is decorated with the 14th century Agnolo Gaddi frescoes. … Read further

Colors of Arezzo in photos

Traditions and festivals in cities around Arezzo

Siena
After the competition, festive marches are held on a town’s street. An entertainment program ends late at night. Typically, Palio is celebrated twice a year - in early July and mid-August. Among other features of Siena, lively and fun atmosphere of the city streets is worth mentioning. The fact is that one of the most prestigious universities in Europe is situated here, so ... Open »
Perugia
The jolly fest was celebrated in the city till the 16th century. The action was followed with folks’ entertainments and performances. Later on the festival turned less significant. It was reborn only in the 19th century. At present a major part of the events of the ethnic holiday takes place at the foot of the Perugian Hill. During the festival the area features numerous ... Open »
Florence
Perhaps, temperament is the main national feature of local people. They are also quite expansive and are very sociable. Local residents are very flattered when visitors are interested in sightseeing, show excitement towards the local culture and observe historical monuments enthusiastically. If a tourist is able to surprise the locals by his/her knowledge of the city’s ... Open »
Tuscany
August is associated with Sagra culinary festivals, which are held in various cities of Tuscany and are well-known to gourmets from around the world. It is noteworthy that every year the festival is dedicated to a particular dish; best Tuscan chefs compete to cook the best of it. During the festival, guests are offered not only to taste delicious national food, but also to ... Open »
Rimini
As a popular beach resort, Rimini is known in the world for its exciting festivals and holidays. The brightest and the most waited event is the Summer New Year, which is also named “Pink night”. It is a scale celebration featuring loud music, hot dancing and bright pink coloring of everything around. This festival was first organized in 2006. All the local folks and city ... Open »

Cityguide on traditions, mentality and lifestyle of people in Arezzo. Learn the best periods to visit Arezzo to discover its soul - authentic festivals, events and celebrations. We will also reveal the interesting habits, attitude towards the world and to tourists in Arezzo.