Sightseeing in Arabba - what to see. Complete travel guide 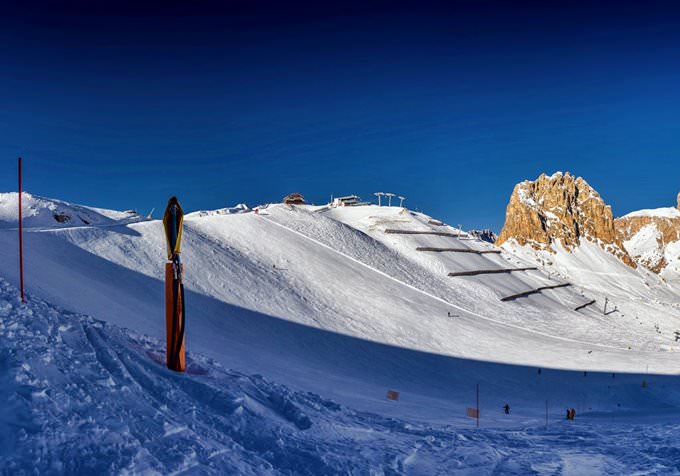 If you are searching for a “serious” alpine ski resort, then do not waste your time reading different advertisements with winter offers. Head to Arabba – compared to other ski resorts in the region, this mountain resort is the most suitable for advanced skiers and professional athletes. High-rise mountains are always covered with snow. The snow remains all year round in Arabba. Local ski trails are simply a gift of the Dolomites to virtuoso skiers.
The Dolomites, which surround the resort, are often credited as the most beautiful mountains in the world. This unique mountain massif got its name because of a high concentration of dolomites and limestone. Because of this, the rocks have various interesting shades, and it feels like their high peaks pierce the sky. First settlements in the mountain valleys appeared many years ago, approximately seven millennia ago.
The 15th century marked the start of Roman dominance in the region. Unfortunately, this didn’t make local people happier. Long isolation from the outer world caused misery and disasters. Constant conflicts between Austrian and Italian monarchies made life only more complicated for the Arabba. Each of the monarchies wanted to make this beautiful land rich in resources their own. World War II also brought much pain to the region because Nazis also wanted to conquer this Italian “treasure”. Copyright www.orangesmile.com
Years passed. Craftsmen and merchants visited different cities of the world where they were telling stories about their beautiful homeland. Soon, curious foreigners started arriving in Arabba in order to see the marvelous place with their own eyes. This is how tourism slowly started developing here. Nowadays, the Dolomites have become the location of a popular alpine ski resort that cordially welcomes guests from all over the world and offers a range of interesting attractions and entertainment to them. If you are one of skiing aficionados who like the burst of adrenaline and want to conquer new trails and mountain slopes, then this resort is exactly what you need. 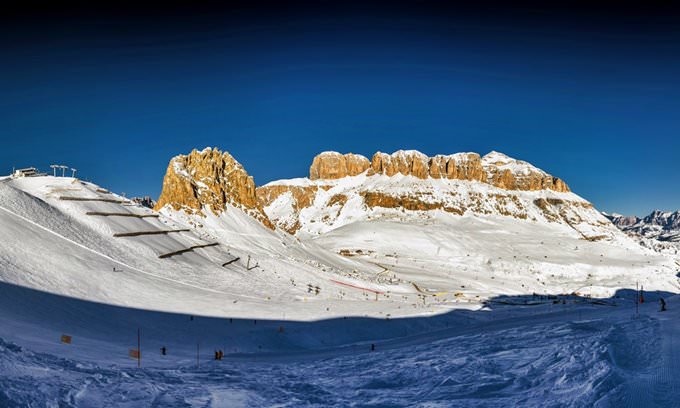 Arabba is not only a place where vacationers can enjoy unforgettable skiing but also participate in different food festivals and celebrations. Connoisseurs of Italian food might notice that local food tastes somewhat different. This is true – local cuisine is an inimitable mix of Italian and Alpine cuisines. The result is really worth trying. The main ingredients are the following: olive oil, arugula, balsamic vinegar that is a popular dressing for salads and other dishes, fragrant basil, various pasta types, and delicious cheese made exclusively from sheep milk. This is a true feast even for experienced foodies.
In Arabba, advanced and professional skiers will find a broad selection of interesting trails. Marked with the black color, these trails are mostly concentrated near one of the numerous cable cars, Porta Vescovo. Local people gave informal names to the trails in this area – Ornella, Fodom, and Sourases. Some tourists might wonder, are there suitable trails for beginners in Arabba? Don’t worry, the resort has suitable trails for absolutely all guests regardless of their experience in alpine skiing. One of these trails is located near Passo di Campolongo. This trail is marked with the blue color. 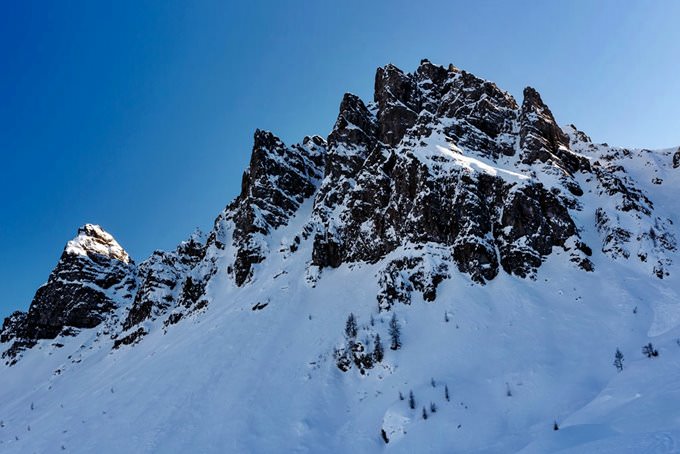 Besides skiing, tourists are welcome to visit local places of interest that will help them learn more about the history and culture of Arabba. An old mill is the first landmark that is worth exploring. The mill is still in a working condition but it doesn't make flour anymore. For many years, the mill was providing food for locals, but it became worn out with time. Eventually, the mill became so old that it almost fell down and nearly wounded people who brought their wheat to grind. Local authorities restored the mill and turned it into a landmark of the village. Nowadays, this is a beautiful reminder of the local architects’ talent.
In order to see how the region looked like centuries ago, consider visiting Castello di Andraz. The historical landmark was built in 1027. The castle and the surrounding nature create a truly incredible view. In the past, the fortified castle was the base of the Diocese of Bolzano-Brixen’s bishop. Castello di Andraz was an important military and administrative center. Besides that, it protected the region from hostile forces and enemies who continuously tried to conquer rich lands in the Dolomites. 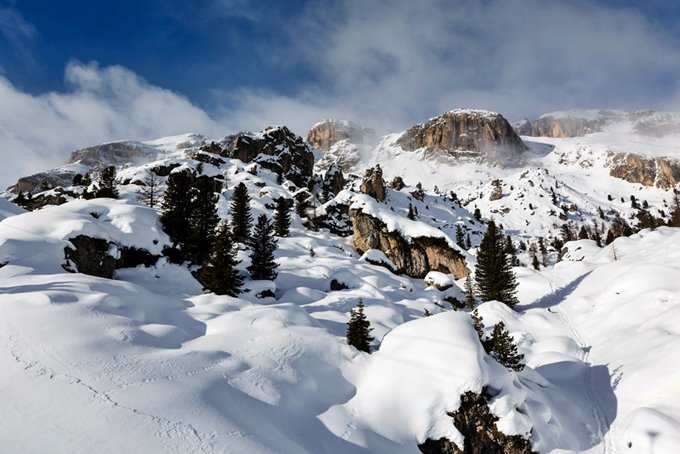 It is easy to reach Arabba from multiple Italian cities. There are no transport problems even in winter. Comfortable ski buses, which depart from Venice Airport, will quickly take you to the destination point. There is a railway station in the city of Brixen that is approximately 70 kilometers away from Arabba. There is also a railway station in Bolzano, but it is located somewhat further. Of course, tourists can always use the taxi services that will take them to Arabba quickly and comfortably. Arabba is located roughly 75 kilometers from Belluno that also has regular bus connection with this area.
This guide to iconic landmarks and sights of Arabba is protected by the copyright law. You can re-publish this content with mandatory attribution: direct and active hyperlink to www.orangesmile.com.

♥   Castle 'Castel Gardena' Santa Cristina Gherdëina, 12.5 km from the center. On the map

♥   Castle 'Castello di Botestagno' Cortina d’Ampezzo, 21.4 km from the center. On the map

National and city parks around Arabba
♥   World Heritage Site 'The Dolomites' , 9.9 km from the center. On the map

♥   Nature Park 'Hochgebirgsnaturpark Zillertaler Alpen' , 58.4 km from the center. On the map

Art galleries in Arabba and around
♥   Art museum 'Diocesan Museum' Brixen, 29.4 km from the center. On the map

Sights around Arabba from our guide 'Extreme places on Earth' Distance from Arabba center - 51 km.
Many people choose Dolomiti for a winter vacation. There are a lot of various placed of interest and good ski routes. Ski resort Arabba is one of the most extreme in the world. There you can find the most complex routes. The beginners in skiing or families can go to Tre Valli. It has a lot of entertainment and rich nature. … Read further

Search touristic sites on the map of Arabba

Sightseeing in regions nearby Arabba

Bolzano
Later this land got into ownership of bishop Trento and he made an order to build a big city there. The city was rebuilt and expanded many times and this action was so systematic that today we can see lots of buildings referring to different architectural styles and periods. This doesn’t make Bolzano unattractive and adds unforgettable charm to the city, moreover, here you ... Open »
Mayrhofen
Mayrhofen is one of the most attractive Tyrol towns. It’s an ideal vacation destination. This is also the largest ski resort in the territory of the Zillertal. The population of the charming Alpine town is nearly 4,000 people, but during the tourist season, the population increases significantly. Multifacatedness has always been one of the key peculiarities of this resort, so ... Open »
Veneto
The romantic city of Verona is known worldwide thanks to the tragic story of Romeo and Juliet. The chief ornament of the city is the Arena di Verona where opera is performed in warm months. Castelvecchio castle, the Basilica di San Zeno and the old Scaliger Bridge are notable too. Continue exploring cultural objects of Veneto during a walk around Rovigo; Concord Academy is ... Open »
Fulpmes
As noted above, despite recent enormous changes Fulpmes maintains its inimitable historical atmosphere. There are many interesting attractions. Local residents consider St. Vitus Church as one of the main symbols of the village. The main cultural center of Fulpmes, Museum blacksmithing, is dedicated to the most important national craft of local residents. Although crafts have ... Open »
Tirol
Several medieval fortresses and castles have survived in small towns. The old fortress and the chapel built in the late 15th century are situated in Landeck. The chapel houses a large collection of ancient frescos and a historical museum. Hal is interesting because of Gazegg Castle and Mint; they were completed in the second half of the 15th century. Tratzberg Castle housing ... Open »

All about Arabba, Italy - sightseeings, attractions, touristic spots, architecture, history, culture and cuisine. Prepare your trip together with OrangeSmile.com - find out the 'must see' things in Arabba, which places to visit, which excursions to take, where the breathtaking views are waiting for you. Planning your trip with this travel guide will help your to get the most out of Arabba in few days.