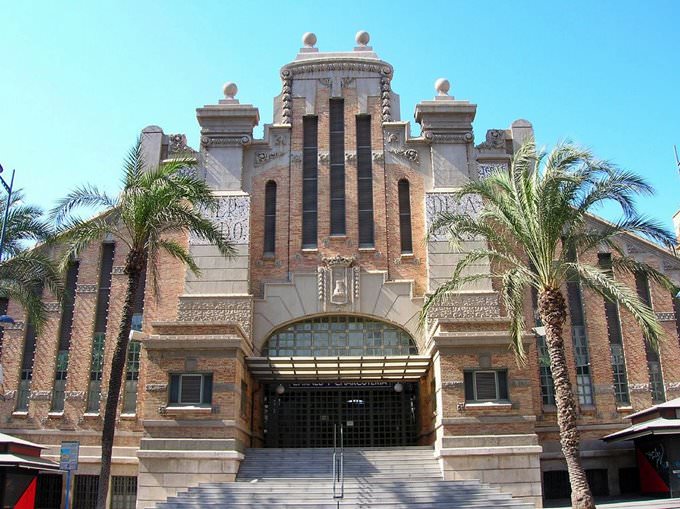 Santa Barbara Fortress remains one of the main symbols of the city. The fortress was built on a high cliff. Previously the site of the castle housed numerous fortifications as from ancient times Mount Benacantil has had an important strategic purpose. There are several viewing platforms near the castle, from which everybody can enjoy panoramic views of the city and the Mediterranean coast. The Monastery of the Holy Face (Monasterio de la Santa Faz) is an important religious site. The monastery was opened in 1766. Its walls keep valuable religious artifacts. Each year in May the monastery is visited by thousands of pilgrims.
Family holidays with kids in Alicante. How to entertain your child, things to show to children.
Alicante is the location of popular theme parks and entertainment centers. This city is literally created for an exciting family vacation. One of the most popular holiday destinations for …

Open
The church of St. Nicholas is another place worth visiting. The building of the church took place in the middle of the 17th century. The Cathedral is built in a unique architectural style of herreresco and has got its name in honor of the patron saint of the city. St. Nicholas protects travelers, so attending the beautiful cathedral by tourists is even more symbolic. Esplanade Avenue is simply the best place for walking. Along the beautiful avenue adorned with a mosaic pattern grow slender palm trees, and the cafes located on the street sell the best ice cream in the city. In the evening the boulevard often hosts music concerts. There is also a special pavilion in the form of a shell built specially for cultural events.
Among the cultural institutions of the city we should definitely mention Alicante Museum of Contemporary Art, which exhibits a large collection of sculptures and paintings by local artists. A visit to Provincial Museum of Archaeology will be another unforgettable journey. In 2004 the museum received the proud title of the best museum of Europe. Many of the items exhibited there are related to the period of the Stone Age. Of course, there is a rich collection of artifacts from later periods. There are also more original institutions in the city, such as Museum of Fire and Museum of Wells located in Garrigos district. Copyright www.orangesmile.com
Cuisine of Alicante for gourmet with top restaurants and cafe
One of the best restaurants of the city is located in the port area. The restaurant’s name is Darsena. As it is not hard to guess, the majority of its menu is occupied by various …

Open
Any large Spanish city (especially if it is located in Valencia or Andalusia) must have its own Plaza de Toros. Alicante is certainly not an exception – the local Plaza de Toros is famous for its extraordinary grandeur. Even if it is not possible to get to the bullfight, the building is worth a visit for the simple reason that it is an excellent architectural structure. Nearby you can see a museum dedicated to bullfighting (Museo Taurino de Alicante), where among the exhibits you can find photos of famous matadors, paraphernalia, costumes, posters of battles, and stuffed heads of defeated bulls. You would be pleased to know that you do not have to pay an admission fee in order to visit the museum. 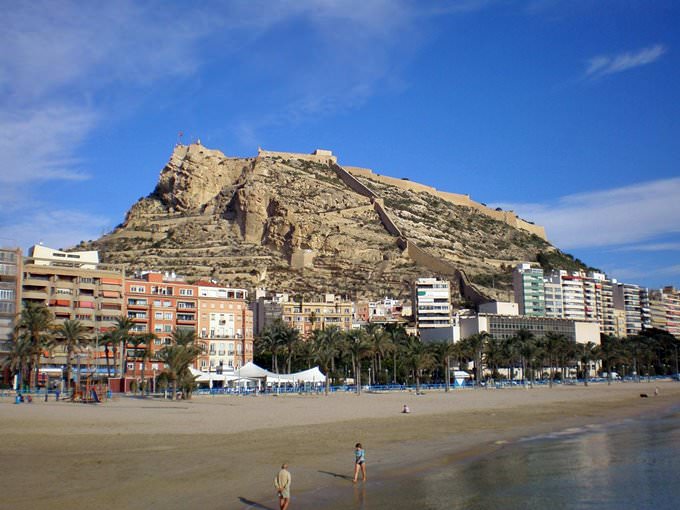 The city also has other religious attractions that are worth visiting. First of all, it is worth noting the Basilica of Santa Maria, which features a beautiful bas-relief and amazingly beautiful altar. The time of construction of the temple dates back to the 14th century. The church was erected on the site of a destroyed mosque, representing some kind of symbol of independent Spain. The building is of high historical value, because at different times it served purposes. For instance, during the Civil War, it was used as an ammunition depot. At this time, the image of the Virgin Mary was stolen and the organ was destroyed. The local people consider it to be the most important temple.
OrangeSmile.com recommends best hotels in Alicante Hotel Maya Alicante , Rating 8,2
Authentic traditions, festivals and lifestyle of Alicante inhabitants
During a year Alicante hosts numerous interesting holidays. However, Bonfires of San Juan holiday remains the most attractive celebration for tourists. The celebrations are conducted each …

Open
From an architectural point of view, Casa Carbonell is quite impressive. This is a residential building located in the city center at the beautiful square Explanada d’ Espanya. Majority considers this building as a symbol of Alicante, and cannot imagine its whole appearance without it. The building was erected in 1925 according to the design of Juan Vidal Ramos. In the architectural aspect you can recognize the Beaux-Arts style, and in the facade – neoclassicism. Looking at this building, you involuntarily start feeling jealousy towards the locals who are fortunate enough to live here. In front of the building there is another one that is striking in its exterior. It is the Hotel Plaza. The buildings (Casa Carbonell and Hotel Plaza) are separated by a beautiful fountain. 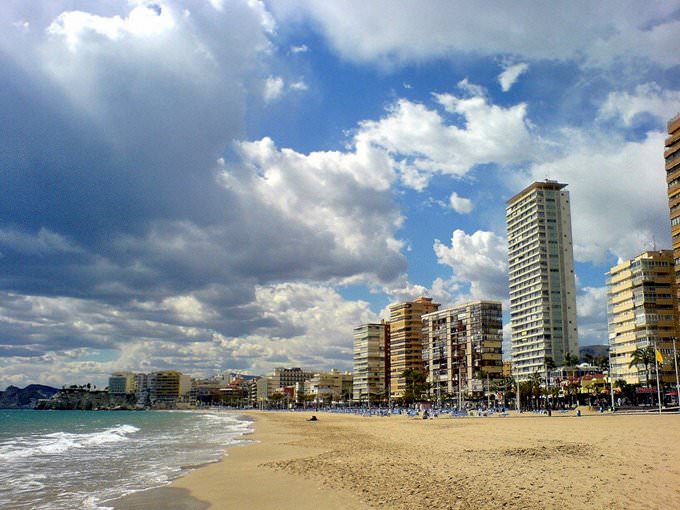 There are several interesting monuments in Alicante. Monumento a Canalejas, Estatua de Icaro, El Panteon de Quijano, Valle de Los Caidos – these names are only a fraction of the fascinating sculptural structures, which you should definitely discover in the city. Connoisseurs of archeology and anthropology will be delighted at the opportunity to visit the Tossal de Manises, or Lucentum. The building brings to mind the ancient Roman times in the history of Alicante. There are still a lot of monuments of the Roman preserved here. The nearby museum has collections of findings from the excavations, and the place itself is located near the beach San Juan.
Your active city break in Alicante. Attractions, recreation and entertainment - best places to spend your day and night here
In Alicante you will find suitable places for fans of night entertainments and lovers of shopping. The city will also please the travellers, who love spending much time outdoors. Club Z is …

Open
Museo de Hogueras is one of the most colorful museums in the entire region. The fact is that it is dedicated to the holiday called Hogueras de San Juan. Here among the exhibits carnival figurines are displayed, and there is no better place to get to know the local traditions. The museum can only compete with the Plaza de Toros. It is also interesting to visit Diputacion Provincial de Alicante, attracting visitors’ attention from the very first sight. You can sit here in the shade of the garden, turning away from the rest of the world. You will also be getting away from all the pressing problems as well as enjoying the beautiful flora species – ficuses, trees.

In the section below, you can get one of our excursion, activities or city discovery tours over Alicante and surroundings. Our website offers 10-30% lower ticket prices, when compared to the offline purchase on the spot.

This guide to cultural sights Alicante is protected by the copyright law. You can re-publish this content with mandatory attribution: direct and active hyperlink to www.orangesmile.com.
Alicante - guide chapters 1 2 3 4 5 6 7 8 9 10 11 12 13

What to visit during two-day excursion in Alicante

Public palaces near Alicante
♥   Palace 'Palace of Condes de Cirat' , 78.5 km from the center. On the map Photogallery of cultural heritage of Alicante

Excursions over cultural sights of neighbours of Alicante

Benidorm
Of course, there are many natural attractions in the city. Puig Campana Mountain is definitely one of them. Even tallest skyscrapers look tiny in comparison with this mountain. Its picturesque hills are great for hiking, and excursion routes cover the most interesting and attractive destinations. The names of many historic streets and avenues speak for themselves - Uruguay ... Open »
Murcia
A building of 1901 which seems at first sight to be rather unremarkable features exquisite interior design. The building has preserved the atmosphere of the beginning of the 20th century. Its decoration is executed in keeping to the traditions of conservative English style. Among other spot of tourist attraction in Murcia there are the Santa Domingo Church of the 18th century, ... Open »
La Palma
A real city attraction is the Tobacco House, which occupies a beautiful historic building. Travelers are attracted by the building's exterior, while locals come here for the best cigars in town. All guests of the island must visit the Caldera de Taburiente National Park opened in 1954. In the middle of the nature reserve, there is a crater of an extinct volcano whose diameter ... Open »
Valencia
Art connoisseurs should definitely make an excursion to Museum of Fine Arts, which exhibits a wonderful collection of paintings by eminent artists. Priceless works by Goya, Joaquin Sorolla, and El Greco attract numerous art lovers to the museum. A walk through historic district of Valencia will also bring a lot of unforgettable memories. You can find beautiful old buildings ... Open »
Albacete
Also, visitors should visit an ancient cathedral, which witnessed many important historical events and is striking with its unique architectural style. A huge number of historic landmarks are concentrated in the suburban areas of Albacete. Exploring all the old castles and fortresses would probably take more than one day full of excursions. Alcalá del Júcar Castle built ... Open »

Culture guide to Alicante. Which fascinating sights to visit once you are in Alicante: temples, churches, museums, theaters and castles. Recommendations (with addresses, phone numbers and links) on the places 'must visit' in Alicante. Plan your own city excursion by using this page info!